American capitalism has had a long and durable romance with Eastern spirituality, and the latter has hardly undermined the former.

Mindfulness as we know it today was born out of a meeting of pragmatic, modernizing Asian teachers looking to make Buddhism accessible to the West and Western seekers who fit the practice into an Occidental psychological framework. ... A technique once meant to help monks grasp the unreality of the self became the inspiration for a new sort of self-help tool, and from there it was just a short leap to mindfulness becoming a business tool. 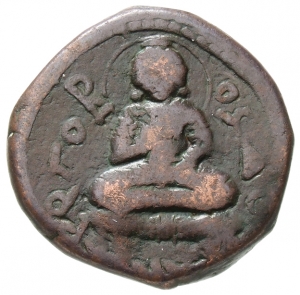 [MHT] PAΓO B OYΔO [Bactrian]. Buddha (Maitreya Buddha) sitting frontally in the lotus position on a low stool, the r. Hand he has raised in the gesture of abhayamudra (gesture of fearlessness) and in the L. He holds a water bottle.

opendharma
RSS
More posts by opendharma.
Ajanta
The Greatest Ancient Picture Gallery by William Dalrymple | The New York Review of Books [http://www.nybooks.com/articles/2014/10/23/greatest-ancient-picture-gallery/] > The Ajanta murals told the Jataka stories of the lives of the Buddha in images of supreme elegance and grace. Unlike the flatter art of much later
Budh Gya
Issued by Hignett Bros & Co Branch of the Imperial Tobacco Co. (of Great Britain & Ireland), Ltd.