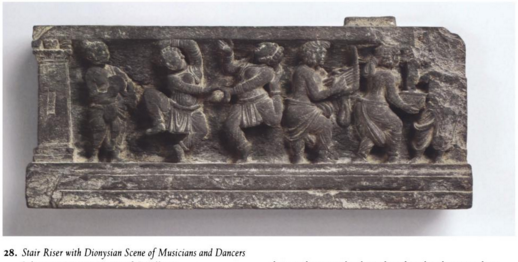 Drinking wine, dancing and music making were apparently popular subjects for the embellishment of early Buddhist religious centers. The Buddha condemned intoxicants, and music and dance were considered unfit for the monastic community, although they were tolerated in lay contexts. We may wonder, therefore, why such themes as drunkenness and the loss of control manifested in wild dance would be found in Buddhist contexts. At the root of this could be the earlier, pre-Buddhist practices celebrating abundance and agricultural prosperity, which involved wine drinking. It has also been suggested that Dionysus was transformed and understood in the Gandharan context as the South Asian god Indra, whom lay followers would have known as the deity who rules over the paradise on top of the world know as the Trayastrimsa heaven. As the lay Buddhist community was probably more concerned with having a positive rebirth - enlightenment being out of reach for all but the most learned monks - the idea of being reborn in a heaven associated with Indra would no doubt have been attractive, as attested by the inscription on the Indravarman reliquary. At least in this instance, then, there seems to be a correlation between altered states of consciousness associated with the loss of control brought on by wine and dance and the concept of heavens in which one could be reborn [27]. Although it is difficult to know exactly how Dionysian concepts and practices functioned in early Buddhist contexts, the appearance of Dionysian imagery in later centuries indicates that such ideas remained an important part of Gandharan religious identity. 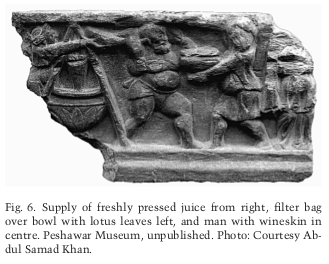 Buddhist monks may have used alcohol for medicinal purposes, but otherwise such beverages were forbidden to them.[9] This raises several questions. If the monks had no use for wine, why did they help in producing it by keeping bowls for the filtered wine and metal filters in their custody? Why did monks not only keep this gear in safe-guard, but also present it to the monastery? Why are pressing holes found near monasteries in Swat, as Olivieri (forthcoming) has pointed out? There is only one answer possible: the monks participated in the popular wine-making festivities. Buddhist tenets are one thing, alienating the order from the age-old and cherished festivals is something else. This is not to say that the monks concerned tasted a single drop, but they functioned as organisers of a festival which was older and, on the whole, more popular than Buddhist ones.

Based on all this I present here a thesis for evaluation: At the time of the year when the grapes were pressed in Gandhara, simple wine was produced by pressing, filtering, and fermentation. It was drunk only a few days after pressing while the yeast was still active. This wine was also produced and distributed near the monasteries, with the sanghas being in possession of fermenta-tion bowls and sieves presented to them also by local monks as pious donations. The consumption of the young wine went hand in hand with the veneration of Pāñcika and Hārītī, present as statues inside the monastery, who were shown drinking as well or holding a grape. Almost every panel connected with wine-making or -drinking also contains one scene where a man approaches a woman in an erotic manner.

The age-old and non-Buddhist wine-cum-merry-making festival was so attractive that its organisation was highjacked by the Buddhist monasteries. It was also adopted by Buddhist com-munities further east, in Sanghol and Mathura. The stone bowls were copied there in the local mottled sandstone with the same lotiform pattern on the lower exterior. On the whole we are faced with a Buddhist example of the otherwise well-known Hindu inclusivism.

Viniculture in northern Afghanistan and Uzbekistan developed under Hellenistic influence. Starting in the later fourth century BCE, Greek colonists brought in vineyards, wine making, drinking vessels and other aspects of the Dionysian festivals. After nomadic peoples took over Hellenistic Bactria, viniculture persisted and flourished under the Kushan Empire. During the first couple centuries CE when the Kushan Empire also flourished, thanks to the expansion of the Silk Road trade passing through its territory, the center of Buddhist activity migrated from the lower Ganges to northwest region of South Asia and Afghanistan, the core territory of the Kushans. Greco-Roman influence, including viniculture, is well expressed in Gandharan Buddhist art. Amphorae, craters, goblets and all kinds of vessels used in Dionysus-Bacchus festivals appear in the many drinking scenes in stone sculptures associated with Buddhist monuments and shrines. The motifs of grapes and grape vines in these bacchanalian scenes indicate that the beverage depicted was grape wine.

The Buddhist institutions and practices developed in the Kushan era then spread to Central Asia and China. Unfortunately, there is a dearth of Chinese information concerning the Western Region after the collapse of the Han central power. Archaeological finds indicate the Silk Road trade continued, and so did the development of viticulture, probably also viniculture. When the Western Region finally emerged from the darkness, Turfan, now called Gaochang in the Chinese records, is a country famous for grape wine, in addition to its millets, wheat, sericulture and many varieties of fruit. People there worshipped a number of local gods but also adhered to Buddhism [Wei Zheng et al. 1973: 83/1847]. The Gaochang state survived the Sui Dynasty, but was conquered by the T’ang. The history of the T’ang, written in the Song Dynasty, repeats the enumeration of the local products, but adds a new item, cotton [Liu Xu 1975: 198/5294]. Native to India, cotton reached Turfan as a cultivated crop in the post-Han and pre-T’ang period, along with viniculture and Buddhism.

The final question is did the Buddhist population of Turfan drink wine? At various times, Central Asia people have been followers of Buddhism, Manichaeism, and Islam, all of which formally ban the consumption of alcohol. However, despite such prohibitions, they regularly drank wine for centuries. For example, while Manichaean doctrine banned alcohol, their monasteries in Qocho nonetheless produced wine.2 It is likely that Buddhists behaved similarly. There is no direct evidence of wine-drinking among Buddhists in Turfan, but there is abundant evidence that wine-drinking was a common practice of Buddhists living on the Tang frontier, particularly in Dunhuang. A large number of manuscripts from Dunhuang generated by lay Buddhist societies (sheyi) document their establishment, regulations, etc. A special kind of document, called a Shesi Zhuantie, announcing Buddhist festivals, social events and business meetings, was circulated among members of lay Buddhist organizations. Almost all of these notices include a statement concerning the punishment for tardiness and absence: “Each of those who are late should pay the fine of one horn of wine, and of those who do not come at all should pay the fine of half a jar of wine, to the group. The wine will be divided among all the members.” Fines of the same type also appear in regulations for lay societies [Ning Ke and Hao Chunwen 1997]. No doubt wine played an indispensable role in both social and religious activities of Buddhism. But these announcements never mention the kind of wine involved; they simply use the character jiu, the generic term for alcoholic beverage.

Jiu also appears frequently as an item in accounts of monastic expenditures, some of which have survived in the famous caves of the Mogao Grottos, in Dunhuang. Buddhist monasteries provided oil, food grains and wine (jiu) for the Spring festivals, Autumn festivals, and parades of Buddha images. All the participants, members of lay societies and monks, enjoyed the food and wine. There were also many other occasions when the monasteries had to provide food and wine, sometimes only for monks, sometimes for visitors and the artisans working there. It seems that the monasteries of Dunhuang stored oil and food grains, but paid for wine with their food grains.

Viticulture and Viniculture in the Turfan Region | Professor Xinru Liu

opendharma
RSS
More posts by opendharma.
David Hume and Buddhism
Abstract: Philosophers and Buddhist scholars have noted the affinities between David Hume’s empiricism and the Buddhist philosophical tradition. I show that it was possible for Hume to have had contact with Buddhist philosophical views.
and it's all over much too quickly
> Two elderly women are at a Catskill mountain resort, and one of them says, ‘Boy, the food at this place is really terrible.’ The other one says, ‘Yeah, I know, and such small portions.’ Well, that's essentially how I feel about life - full of loneliness, and misery, and suffering,