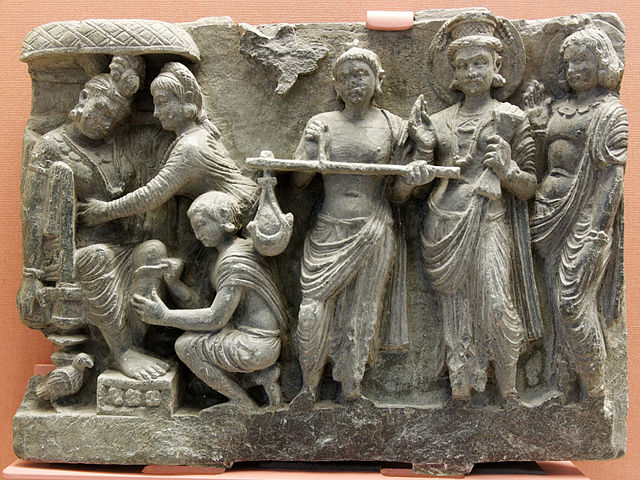 Sibi Jataka: during one of his previous lives, the Buddha offers his own flesh to a hawk to ransom the life of a pigeon.
Date: between circa 100 and circa 299
Location: British Museum, Department of Asia, room G33

The kingdom of Sibi produced many virtuous kings of whom was the son and successor of King Ushinara. This new Sibi king was known for his philanthrophy among his other virtues. One day, Indra and Agni came to test this. The two deities disguised themselves as a hawk and a pigeon. The hawk started chasing the pigeon who fell on King Sibi’s lap trembling with fear. The hawk demanded the king to surrender the pigeon as its prey. This the king refused, as he decided to protect the poor thing who had taken refuge under his protection. After much argument the hawk agreed to leave the pigeon alone if the king would offer a piece of flesh from his own body which was equivalent to the weight of the pigeon. The king was more than happy to make such a sacrifice. Strangely, after endlessly cutting off his own flesh from different parts of his body and putting it on the scale, the king found that the pigeon still overweighed. Then the king threw his entire body to the scale even then he could not equalise the weight of the bird. At this point the hawk and the pigeon revealed their true identity and offered boons to the king for his unbounded charitable spirit.

Jerome Robbins Dance Division, The New York Public Library. "Borobudur [Barabudur] - General. 28. Relief on main wall, lower series, 1st gallery, depicting the Cibijataka; a dove, pursued by a hawk, seeks refuge with the King of Cibi, who is renowned for his kindness; the hawk, asked by the King what he wants in exchange for the dove's life, demands the dove's counterweight in flesh from the King's body; the dove, put on the scales, is actually the future Buddha in disguise and, testing the King's courage, keeps putting on more weight, so that the King is forced to cut out many chunks of flesh from his body before the hawk is satisfied. (Photo: D.P. 8095--list #28); 28a. Relief, Borobudur. (Photo: D.P. (no number)." The New York Public Library Digital Collections. 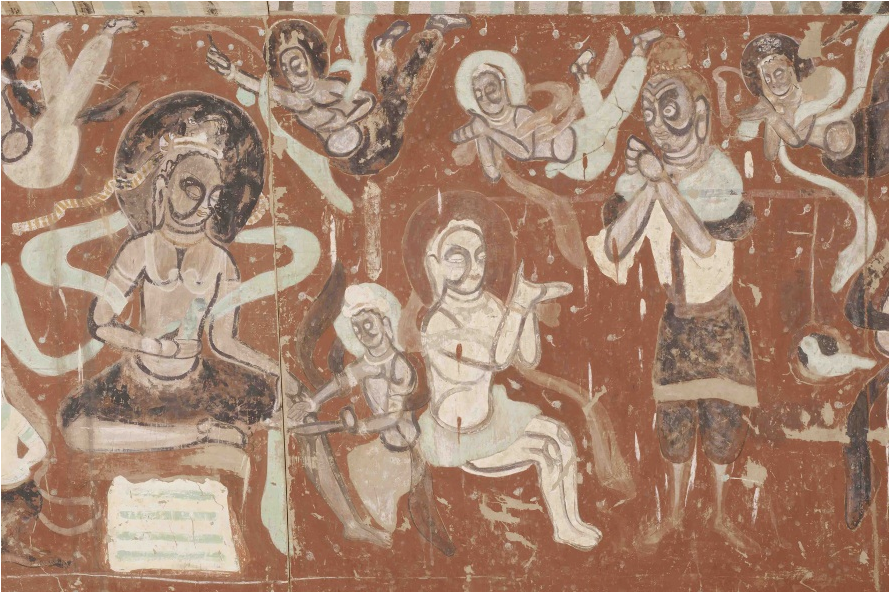 King Sibi was the ruler of the Sibi Kingdom in ancient India. As a devout Buddhist, he pledged to save all sentient beings from suffering. In order to test him, Indra and his minister Viśvakarman transformed themselves into a hawk and a dove. The hawk chased after the dove trying to eat it. The dove then sought refuge in King Sibi. However, the hawk begged the king to let him eat the dove otherwise he would die of starvation. In order to save the dove as well as the hawk, King Sibi decided to offer his own flesh to feed the hawk.

The hawk accepted the offer with the condition that the amount of flesh he received from the king be equal to that of the dove. King Sibi promised and let a butcher cut out his flesh, which was placed on one side of the scale while the dove was placed on the other side. However, after cutting out nearly all his flesh, the scale still showed that the dove was heavier. Then King Sibi sat on the scale to indicate that he was offering his entire self. Moved by King Sibi's virtuous deed, Indra finally restored his flesh. 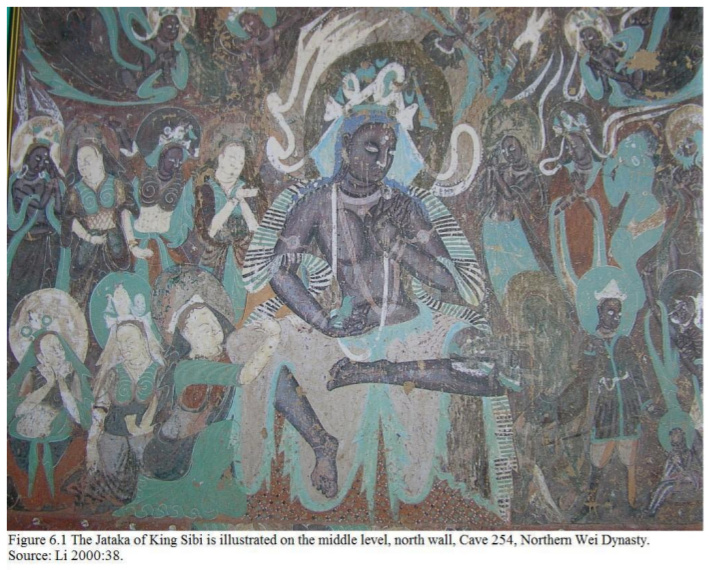 In Cave 254, Northern Wei Dynasty, the King Sibi Jataka tale is painted on the middle level of the north wall and includes other additional characters in a common background (Figure 6.1). This story, told in ten scenes, is about King Sibi offering his own flesh to feed a hawk in order to save a dove‘s life (Figures 6.1.1 to 6.1.10). It begins as follows: (1) At the upper right, a hawk chases a dove; (2) King Sibi, with a halo, sits at the center, bends his left leg, and stretches his right leg to hold the terrified dove that has taken refuge and sits in the palm of the king‘s right hand; (3) In the lower right foreground, the hawk asks him to return the dove to him as its prey; (4) Then King Sibi decides to offer his flesh to save the dove‘s life; (5) A small attendant, lower right, cuts at the king‘s left leg to pay the dove‘s ransom; and near to him there is a standing man who holds a pair of scales—the dove on the right scale and the full body of King Sibi on the left scale; (6) Three wives, lower left, show their distress. They are dressed in foreign costume, which shows a strong Western Regions influence; (7) The scripture illustrated in this tale shows King Sibi sitting on a scale while all the heavenly gods, who admire King Sibi‘s practicing the path of the bodhisattva and sacrificing his entire body to ransom the dove, reverence him with palms and fingers held together in a praying position. They are on both sides of the middle row; (8) Celestial beings, in the upper row, fly and scatter petals to celebrate the restoration of King Sibi‘s life (Hui-Jue et. al 1927:352a); (9) Finally, the King, on the left scale, offers his whole body to save the dove because his flesh cannot balance the dove on the right scale; (10) At the end of the story the king is restored to wholeness by the Shakra, also known as Shakra Devanam Indra, who comes from heaven to test King Sibi‘s benevolence. 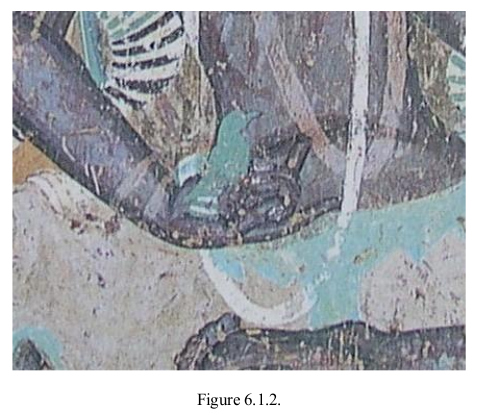 King Sibi, with a halo, sits at the center, bends his left leg, and stretches his right leg to hold the terrified dove that has taken refuge and sits in the palm of the king‘s right hand