Monasteries played an active role in the economic life of Chinese people. During the Tang dynasty, some Buddhist monasteries evolved into big estates that owned expensive means of production and employed large numbers of tenants. After the great persecution in 845, the economical role of Buddhist monasteries was greatly reduced but they remained religious, social and cultural centers in the local society. During the seventeenth century, monasteries that attracted gentry patronage again emerged as influential land-owners and commercial centers with significant economic means to participate in trade and production.

Unlike their Japanese counterparts, Chinese monasteries possess no strict sectarian identities and affiliations. Their identities are usually acquired from their abbot's sectarian or lineage affiliation. Within a monastic society, the abbot and leading monastic officials belong to a small group of elite monks who at various stages of their careers had been acknowledged as having reached enlightenment and acquired a status on a par with their patriarchal ancestors. To prove their status of spiritual attainment, certificates of dharma transmission were offered to these monks. On the basis of dharma transmission, a hierarchy within this elite group or fellowship can be established with a certain degree of exactitude, which displays parallels to the family organization prevalent in traditional Chinese society. On the one hand, abbots were linked to monasteries; on the other, and at the same time, they were also incorporated into other kinds of relationships, especially those of dharma transmission. In addition, many outstanding scholar-officials or literati visited monasteries and maintained close relationships of patronage through donation, literary composition, and political favoritism. Moreover, abbots and men of letters left writings on monasteries, which are an invaluable source for studying these religious sites.

Three specific problems had to be addressed. The first is that of multiple affiliations. Ideally, Buddhist masters’ sectarian affiliations should be fixed. In reality, however, monks not only changed their affiliation but even acquired several sectarian identities by receiving dharma transmissions from different masters. The second problem is how to document monks whose lineages are not known. For many reasons, some monks' lineage affiliation can not be found in our records. Nevertheless, the data on these monks has to be entered into the system, permitting a later determination of their status when new evidence becomes available. The third problem is the existence of alternative dharma transmissions. For example, information concerning the person and the affiliation of a Tang period monk called Daowu 道悟 is conflicting in the records. We find one person of the name with two affiliations, while in some sources two persons of the name appear, each with a single affiliation. This problem entails further complications for our system, since a change of affiliation by a monk also affects the status of his disciples.

Our experience shows that the key is to have a clear idea about the various relationships and to determine the nature of these relationships as one-to-one, one-to-many, or many-to-many. After careful analysis, we determined the following types of major relationships in the database.

In this study, our objective is to determine if the distribution of various religious sites form different levels of regional systems and how they exist either interdependently or independently in relation to social, economic, and cultural factors that are hierarchically structured in space. We believe that the distribution of religious sites form different functional levels of regional systems de-fined by various regional factors. Here, it is necessary to review G. William Skinner’s Regional Systems Analysis (RSA) based on Macroregions and Hierarchical Regional Space (HRS) because our approach is based on critical re-examinations of his methodological framework. Inspired by his delimitation of China’s physiographic macroregions that are structured socioeconomically by hierarchies of market towns and city systems, our approach expands upon his earlier model of the spatial organization of China’s agrarian society presented in the groundbreaking series of articles published in the 1960s and 1970s.

Although the method of RSA, which Skinner adapted to the China field, proves to be useful in conducting research on spatial variations among demo-graphic and economic factors, such an analysis has never been adopted in the study of religious sites. Our initial findings suggest that the distribution of relig-ious sites also form regional systems in China, and raises the question whether these regional systems coincide with existing socioeconomic systems or not? And if anomalies exist, how can we reconcile the differences? 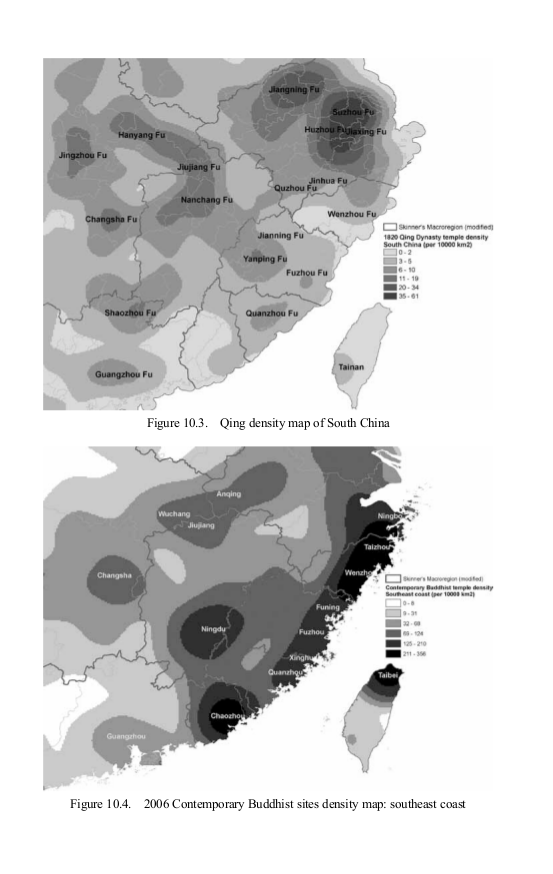 “What is the role of religion in geography?” This simple but profound question intrigued the renowned humanist geographer Yi-fu Tuan in recent years and became the subject of his book Religion: From Place to Placeless. In his view, religion and geography share a common undertaking, which is to make the earth a comfortable abode for human beings. The difference is that religious sites pos-sess a unique layer created through “powers of symbolization” and impose an order on landscape. In this paper, we adopt a different approach to understand such an order imposed by religion on landscape and provide a blueprint for understanding Chinese religions from a geographical perspective. The purpose of this study is not to put forward a grand theory about RRS. Rather, we intend to suggest a new way of describing and explaining the distribution of religious sites.

opendharma
RSS
More posts by opendharma.
drawings that have the form of living creatures
> Some time later while Nanda [the reluctant convert] was sitting on a rock day-dreaming about Sundara [the young bride he had relinquished], he drew her picture on the rock." Maha-kasyapa happened to pass by, saw the drawing on the rock, and asked Nanda what he was doing. The answer was,
Dalai Lama, India 1959
Dalai Lama Reaches India (1959) [https://www.youtube.com/watch?v=ydrM3_cqTic] | British Pathé > The 23 year old god king of Tibet makes his first public appearance since his escape from the Chinese communists. In Tezpur, a tea growing center of north-eastern India, the Dalai Lama is greeted by