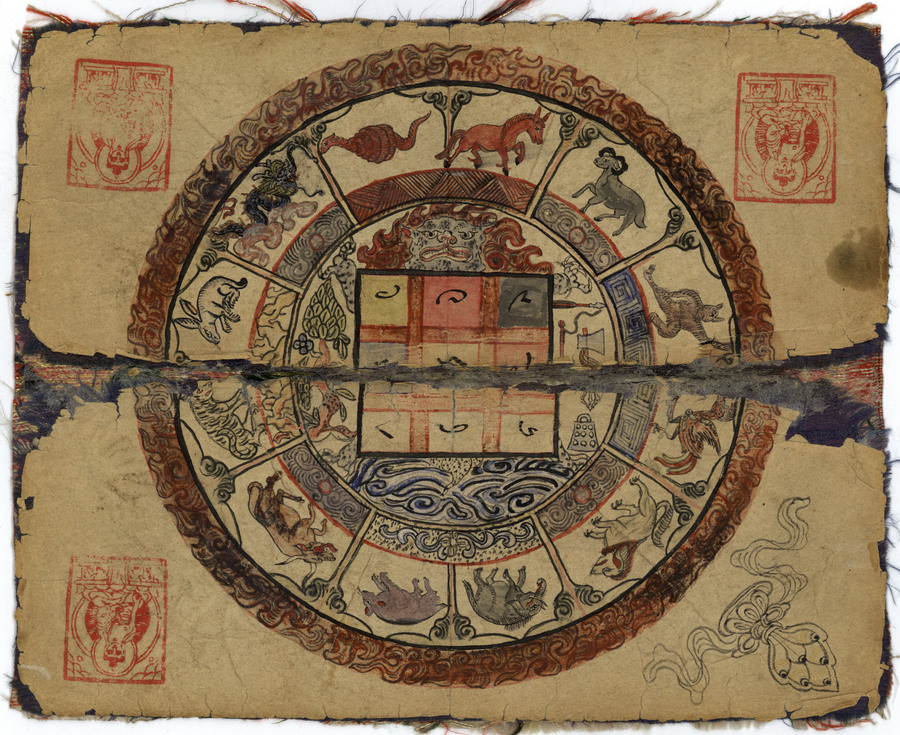 Early astronomical maps of nomadic tribes dating back to the Imperial Mongol period (13th to 14th centuries) describe over 1,000 stars, 12 zodiac constellations, 28 moon positions and the positions of the sun during the year’s twelve months and twenty-four seasons, not to mention solar and lunar eclipses.

This untitled manuscript from the 19th century contains dozens of charts used by Mongolian astrologers, who were generally Buddhist monks. They used these charts to calculate calendars with auspicious days for various activities and forecast seasonal climate, eclipses, and other events based on the positions of planets, the Sun, the Moon, and the constellations. The text and charts in the book largely follow Tibetan traditions, and specifically, the text of Kalacakra Tantra, which was introduced to Tibet in 1024, and is closely associated with Buddhist cosmology.

Most Mongolians are followers of Buddhism, a religion which originated in India and came to Central Asia via the Silk Road in the 3rd century CE and from Tibet and China during the era of the Mongolian Emperor of the Yuan dynasty, Kublai Khan in the 13th century. Because of this, Mongolian astronomy was heavily influenced by Indian, Tibetan, and Chinese traditions. This manuscript itself is in Tibetan, the liturgical language of Mongolian Buddhism, and the charts flow out of the Tibetan Pugpa tradition appropriated by the Mongols as “The New Positive Lineage” in 1786 by Sumpa Khenpo Yeshe Peljor, a Monguor Mongol master of both astrology and medicine from Amdo, one of the traditional regions of Northern Tibet near modern-day Mongolia. In 1789 a school for the study and practice of astrology was established in Urga (Ulan Bator). Most of the calculations follow the sixty-year cycles of Chinese astrology with some adjustments made to align the calendar to begin its cycle with the birth year of the Buddha in the fifth century BCE.

NIH Turning the Pages: All Pages

Many of the charts in the manuscript used for making calculations may not appear to Westerners to be charts at all. The leaf pictured above contains charts in the form of a man’s body (far left) and a glaring face with its mouth open (far right). The numbers written in cursive on the human chart on the left (‘khor lo) are used to calculate the movements of Saturn (spen pa). According to old European medical astrology Saturn affected the spleen, whereas in Indian astrology, Saturn rules the knees and legs. This chart places Saturn at the center of the male body to suggest the planet’s influence on bones, ribs, nerves, and possession of male energy. The chart on the right resembling a face is used to calculate Rahu, which corresponds to the solar eclipse. Garuda, a mythical half-man/half-bird figure, is also depicted on the page, to represent the force and power energies that are at play in the accompanying charts.

The charts on this leaf, pictured above, refer to a text used for the calculation of the stellar constellations (skar ma) and corresponding fluctuations in Naga or serpentine energy. In the tables, the 28 lunar mansions, or segments of the lunar ecliptic, are each given by name. Nagas are powerful spirits of the underworld that take the form of snakes (sprul) and half-snake/half-human creatures (klu). Naga energy has an important effect on human health, wealth, and weather, and this kind of divination chart is used to determine Naga offerings and practices.

A Mongolian Manual of Astrology and Divination | The Public Domain Review