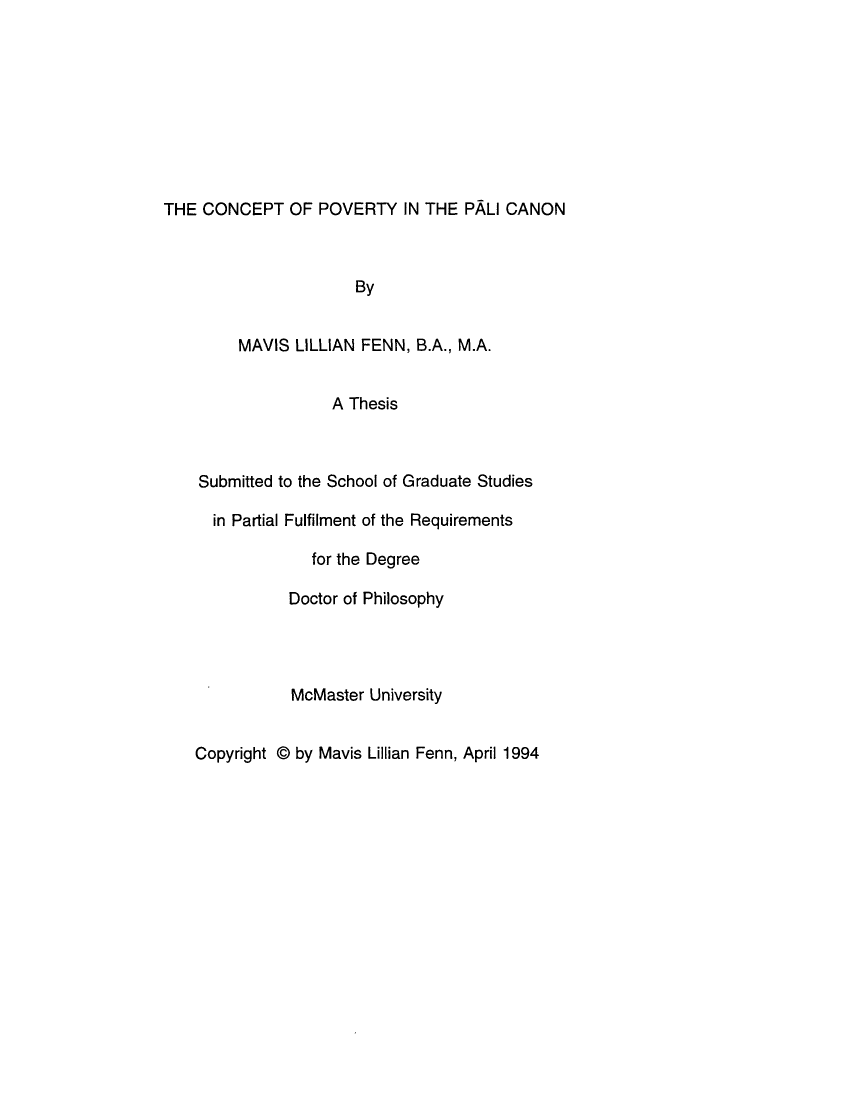 I will argue that discussions of poverty in the Pali Canon indicate that the connection between poverty and spiritual development may be a negative or positive one. Poverty that prevents an individual from participating fully in community life results in dehumanization that severely restricts, if not destroys, the possibility of spiritual progress. This is the notion of poverty as deprivation. Poverty undertaken for religious ends can promote spiritual development. It is a "blessing." This is the notion of religious poverty.

I will also argue that the relationship between poverty and kamma (deed) is not a straightforward one. There are several references in the Canon which suggest that poverty is the kammic result of a failure to give, particularly to the religieux. However, kamma as the cause of poverty is noticeably absent from texts in which extended discussions of poverty-related matters occur. A survey of texts that refer to kamma indicates that statements about kamma in the Pali Canon are themselves inconsistent. Because of this, I set aside the commonly held belief that early Buddhist texts hold kamma to be the sole cause of all poverty and focus my attention on those texts that appear to attribute poverty to non-kammic causes. These texts ground their notion of poverty in a view of society as a reciprocal network of relationships whose common life and values are embodied in the king, whose responsibility it is to ensure that there are no poor. Poverty, then, in this analysis is a social issue that effects the spiritual development of all members of the society.

Because the quest for liberation is necessarily pursued within society, Buddhism must take into account socio-political matters as well as individual ones. Thus, poverty must be understood as an individual matter (kammic), a social matter (related to communal life), and a religious matter (related to nibbana). An examination of the renouncer-community (sangha) and its relations with the laity reveals the central values upon which socio-political attitudes towards poverty are based. This view of sangha-lay relations differentiates my study from those which view early Buddhism as a radically individualistic "world-rejecting" religious movement that had no concern for social or political matters.

Cakkavatti-Sihanada Sutta | DN 26: The Lion-roar on the Turning of the Wheel (English) - Dīgha Nikāya - SuttaCentral

The ethical system presented in the texts is clearly grounded in the anti-structural values of the renouncer. The religious life is consistently portrayed as the best and the most productive life. The sangha is the repository of those values, and the description of them in the texts is consistent with what Turner calls the values of communitas, values that affirm the commonness of all humans while acknowledging their individuality and interdependence. When activated, communitas values produce a community that is dedicated to the development of all its members and which is characterized by inclusiveness, friendship, compassion, and a high standard of individual moral behaviour. The presentation of this notion of community in the texts is visionary and, I would argue, self-consciously so. There is no notion in any of the texts examined that the values of communitas can be fully realized within the social order. Even the cakkavatti, the most religiously developed layman, must abandon socio-political life in order to attain liberation.

While the radical social criticism of the renouncer is visionary, the milder social criticism of the socio-political texts is pragmatic. Kingship, the Agganna Sutta implies, is necessary to stop the inevitable degeneration of humans due to greed, lust, and violence. And, a point that frequently goes unnoticed, the social contract between the king and the people in the Agganna Sutta gives the king the right to use coercion. However, the manner in which the king exercises his power is to be guided by dhamma, righteousness, the values of communitas. These require that he treat people fairly, regardless of their station in life, and that he maintain a peaceful, stable social order through appropriate means. The core of that duty lies in ensuring that there are no poor (according to the Cakkavatti-Sihanada Suttanta and the Kutadanta Sutta). In the Kutadanta Sutta the king is also seen as promoting the creation of wealth through job creation and fair wages for public service.

The texts in this dissertation present us with a paradox. Those of chapters three and four generally view the social order and its values of family and wealth in a positive light. Wealth, according to these texts, promotes peace and harmony, and wealth expended in the care of others or for the common good is itself seen as a religious observance. Most important, wealth makes possible the creation of the community in which the values of communitas can be fully realized, the sangha. The texts of Chapter Five, however, view wealth as an obstacle to the religious life. Possessing even a spade for cultivating food, the Kuddala Jataka asserts, is dangerous to one's spiritual development.

Given the presence of both these views in the same texts, as in the Cakkavatti-Sihanada Suttanta and the Kutadanta Sutta, I would argue that the Pali Canon makes no attempt to ignore or minimize this paradox. Indeed, the presence of both attitudes towards wealth in the same text, and the care taken in the Vinaya to ritually establish and maintain the sangha's separation from wealth, serve to emphasize the paradox. The sangha's need for wealth in order to survive precludes it from providing a complete alternative to structure. As structure must take the vision of communitas into account when formulating its categories, so too, must communitas come to terms with structure. As the dissertation has shown this accomodation takes two forms. Ritually, the sangha, through the catuddisa bhikkhu-sangha, symbolically provides a filter between itself and the pollution that wealth brings with it, and the spiritualization of giving turns the receipt of gifts into a means by which the sangha exercises its mandate to assist others in their spiritual development. Further, through its receipt of dana, moral teaching (dhamma/kamma), and views on kingship, the sangha attempts to infuse the laity with the values of communitas that will encourage them to aspire to incorporate those values in their socio-political life. It is within this framework that we must place any understanding of poverty.

There are two kinds of poverty in the Pali Canon. The first is poverty understood as deprivation, an understanding that is similar to our most common modern understanding of the English term "poverty." The understanding of poverty as deprivation is expressed most strongly in the Cakkavatti-Sihanada Suttanta. The Cakkavatti-Sihanada Suttanta provides what I would call a model of sufficiency similar to Scott's notion of "enough," and it is through this model of sufficiency that the text defines its understanding of what it means to be "poor." Material sufficiency in the Cakkavatti-Sihanada Suttanta consists in possessing sufficient material resources to care for self, family, a business which would presumably allow one to care for others as outlined in the Sigalovada Sutta, and to make religiously productive gifts. Because this statement occurs in the text within the context of a discussion about poverty and its consequences for individuals and the social order, it also constitutes a general definition of poverty. Poverty is "the lack of sufficient resources to care for self, others, conduct a business, and make religious donations." The consequences of this kind of poverty are dehumanization not only for the individual who is deprived of the ability to discharge his/her obligations to others, but for society as a whole.

The second type of poverty is what would in English be called "religious poverty." It is commonly expressed in Pali as akincana. There are only two instances (Sigalovada Sutta and Kunala Jataka) in which the term "akincana" denotes poverty as deprivation; elsewhere it is used to refer to monks and nuns and denotes their "possessionlessness," and their "stainlessness." Possessionlessness refers to a simplicity of lifestyle that is voluntarily adopted in order to pursue liberation free of the temptation, responsibility, and distractions inherent in wealth. It is the opposite of the poverty of deprivation, and is, ideally, undertaken for the benefit of others as well as self. It receives symbolic expression in the notion of the Four Requisites.

In the Pali Canon poverty understood as deprivation signifies all that divides us from each other; it signifies the abuses that arise from unbounded structure. Possessionlessness, religious poverty, signifies all that unites us and reminds us of our interconnection with each other, the natural world, and the cosmos. As poles apart they signify the paradox of human existence. The dynamism created from their struggle with each other signifies the human struggle towards a better vision of what it means to be human and in community.