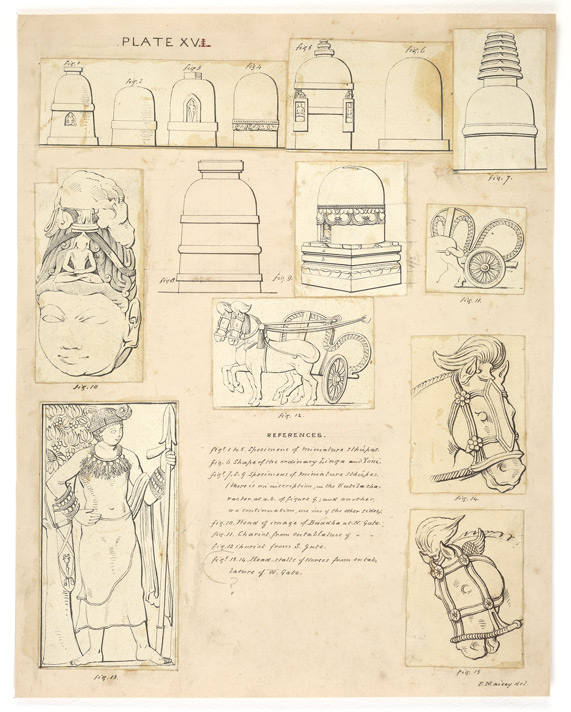 Lieutenant Maisey spent the cold seasons of 1849-50 and 1850-51 at Sanchi to prepare an illustrated Government report of the antiquities of the site. He was joined by Major Alexander Cunningham in 1851. The result of his work was published in 'Sanchi and its remains' of 1892, illustrated by reproductions of his own drawings. 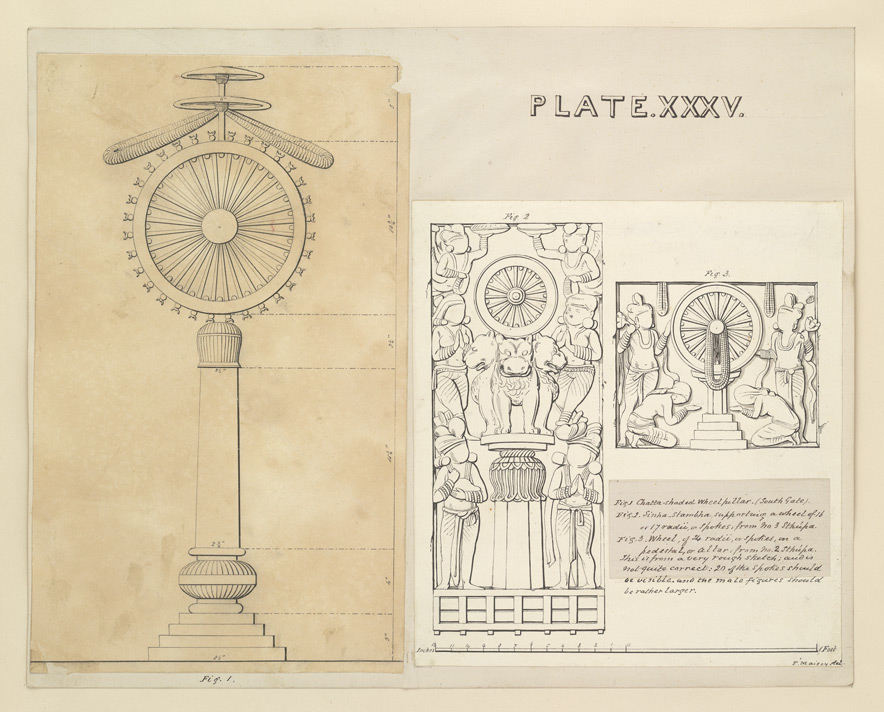 Lieutenant Maisey spent the cold seasons of 1849-50 and 1850-51 at Sanchi to prepare an illustrated Government report of the antiquities of the site. He was joined by Major Alexander Cunningham in 1851.

Fig.1 represents the Dharmachakra pillar which is carved on the south side of the west pillar of the southern gateway of the great stupa of Sanchi. In his 'Sanchi and its Remains' of 1892, Maisey wrote, "The fourth or top compartment has a representation of the worship of the sacred wheel-symbol, by men and women, in Indian dress, and eight deer. The wheel has thirty-two spokes; each of which ends, on the outer circumference, or tire, in a small disc-and-crescent symbol..."

Fig.2 shows the Sinha-stambha or lion pillar supporting the wheel of Dharma or Law which Buddha set in motion with his First Sermon, carved on the right post of the gateway or torana of Stupa 3.

Fig. 3 depicts the adoration of the Dharmachakra, the wheel of Dharma or Law. 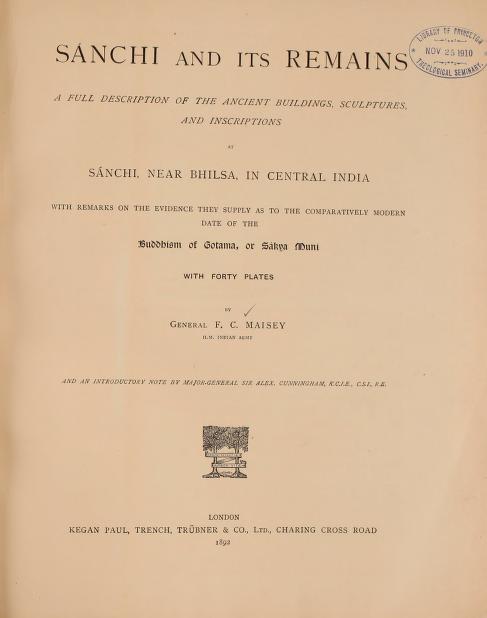 Sánchi and its remains; a full description of the ancient buildings, sculptures, and inscriptions at Sánchi, near Bhilsa, in Central India, with remarks on the evidence they supply as to the comparatively modern date of the Buddhism of Gotama, or Sákya Muni; with forty plates : Maisey, Fredrick Charles | 1892

opendharma
RSS
More posts by opendharma.
The Concept Of Poverty In the Pali Canon
The Concept Of Poverty In the Pali Canon, Lillian Mavis Fenn, Apr-1994 | McMaster Open Access Dissertations and Theses [https://macsphere.mcmaster.ca/handle/11375/13724] > I will argue that discussions of poverty in the Pali Canon indicate that the connection between poverty and spiritual development may be a negative or
The bodhisattva Avalokiteshvara
The bodhisattva Avalokiteshvara Staand beeld met vier armen van Avalokitesvara. c. 750 - c. 875 > A bodhisattva is one who has almost attained the state of enlightenment, but chooses to remain in the human world to help others on their journey to this state. Avalokiteshvara is recognizable from his hairstyle,