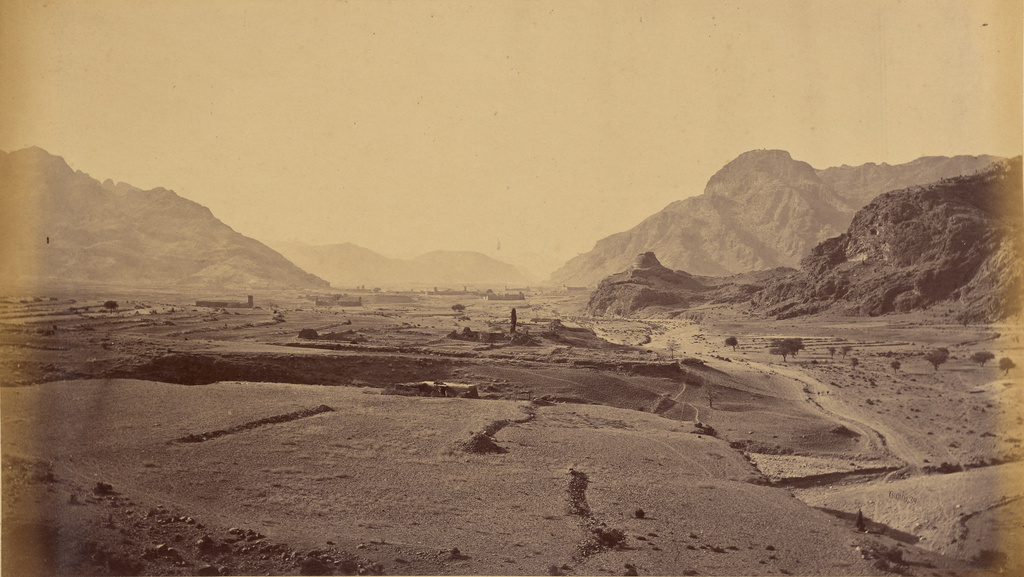 Photograph of the ruined Buddhist stupa called the Sphola Stupa overlooking scattered villages in a valley of the Khyber Pass, taken by John Burke in 1878. Burke accompanied the Peshawar Valley Field Force, one of three British Anglo-Indian army columns deployed in the Second Afghan War (1878-80), despite being rejected for the role of official photographer. He financed his trip by advance sales of his photographs 'illustrating the advance from Attock to Jellalabad'. Coming to India as apothecary with the Royal Engineers, Burke turned professional photographer, assisting William Baker. Travelling widely in India, they were the main rivals to the better-known Bourne and Shepherd. Burke's two-year Afghan expedition produced an important visual document of the region where strategies of the Great Game were played out.

The stupa dates from the 2nd to the 5th century AD and lies between Ali Masjid and Landi Kotal. It consists of a dome resting on a three-tiered square base and stands as testament to the Buddhist era in the region when the Khyber was within the empire of the Kushanas. Gandhara sculpture has been excavated at this site in the early 20th century. 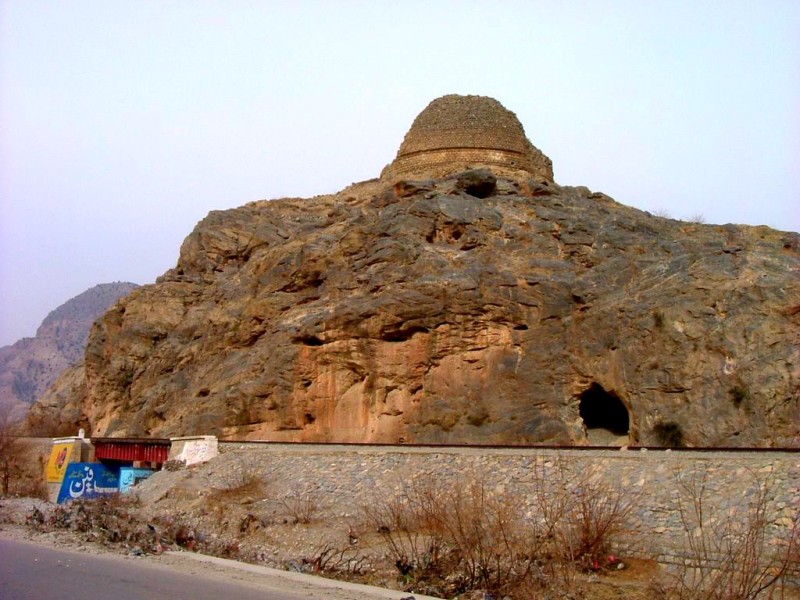 Between Ali Masjid and Landikotal, there is a roadside mound with a Buddhist stupa on top. Called the Sphola stupa, the structure dates back to the 2nd to the 5th century AD, during the reign of the Kushan dynasty. A newly constructed paramilitary checkpoint blocks the façade of the stupa, which consists of a dome resting on a three-tiered square base. The mound on which the stupa stands, is riddled with small caves — an indication that it has been dug into repeatedly. “Some 20 to 25 years ago, local tribesmen dug these caves in the hope of finding riches they believed were buried underneath,” Amirzada explains. “And they found a treasure trove of Buddha figurines, clay-made utensils and gold and copper coins.”

The political authorities intervened to get the excavation stopped, but a decade later, another man decided to try his luck. “A local driver sold his truck, bought equipment and started digging the mound,” Amirzada says as he ties in vain to recall the man’s name. “He spent all the money on excavation and became bankrupt — but found nothing,” the journalist adds with a snigger. “Ever since then, nobody has dared to try his luck.”

The stupa is a 2nd century Buddhist monument in Zarai village near Jamrud. It is a reminder of the great Kushana Empire and Buddhism nexus which is often depicted in Gandhara artefacts. In fact, Gandhara sculptures were excavated at this very stupa and are now housed in the museum in Peshawar.

Buddhism once flourished in the Gandhara civilisation. During this time, a number of monasteries, stupas and other institutions were set up around the region – few have been preserved in all their glory.

Even in the provincial capital, almost every such symbol of the past has crumbled away.

Sphola Stupa is possibly the only such monument left in the Khyber Pass area. But instead of being treated as a conservation site, it is has been turned into a Frontier Constabulary (FC) check post – the height provides a useful vantage point to the troops. 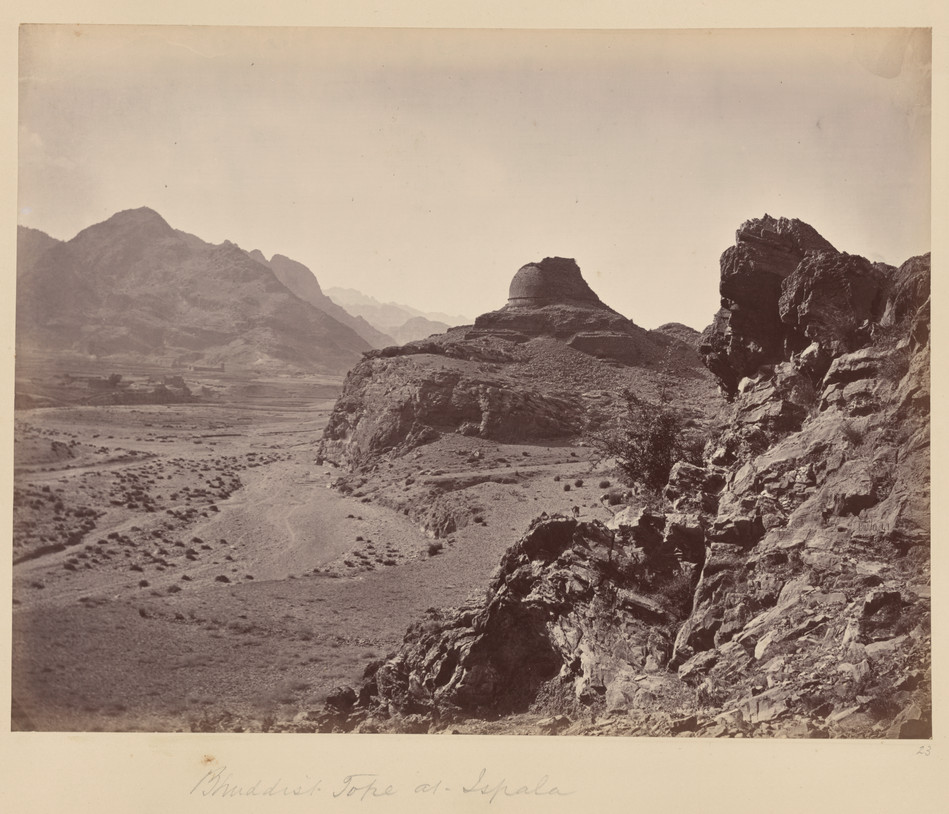 This photograph of the Buddhist tope (stupa) above the Afghan village of Sphola, about 25 kilometers from Jamrūd, is from an album of rare historical photographs depicting people and places associated with the Second Anglo-Afghan War. This ruined stupa features a dome resting upon a three-tiered base. Sphola sits in a ravine located midway between Ali Masjid and Landi Kotal in the Khyber Pass. The stupa may have been constructed towards the end of the Kushan Empire or soon after (third to fifth centuries). It is the most complete Buddhist monument in the Khyber Pass. The Second Anglo-Afghan War began in November 1878 when Great Britain, fearful of what it saw as growing Russian influence in Afghanistan, invaded the country from British India. The first phase of the war ended in May 1879 with the Treaty of Gandamak, which permitted the Afghans to maintain internal sovereignty but forced them to cede control over their foreign policy to the British. Fighting resumed in September 1879 after an anti-British uprising in Kabul, and finally concluded in September 1880 with the decisive Battle of Kandahar. 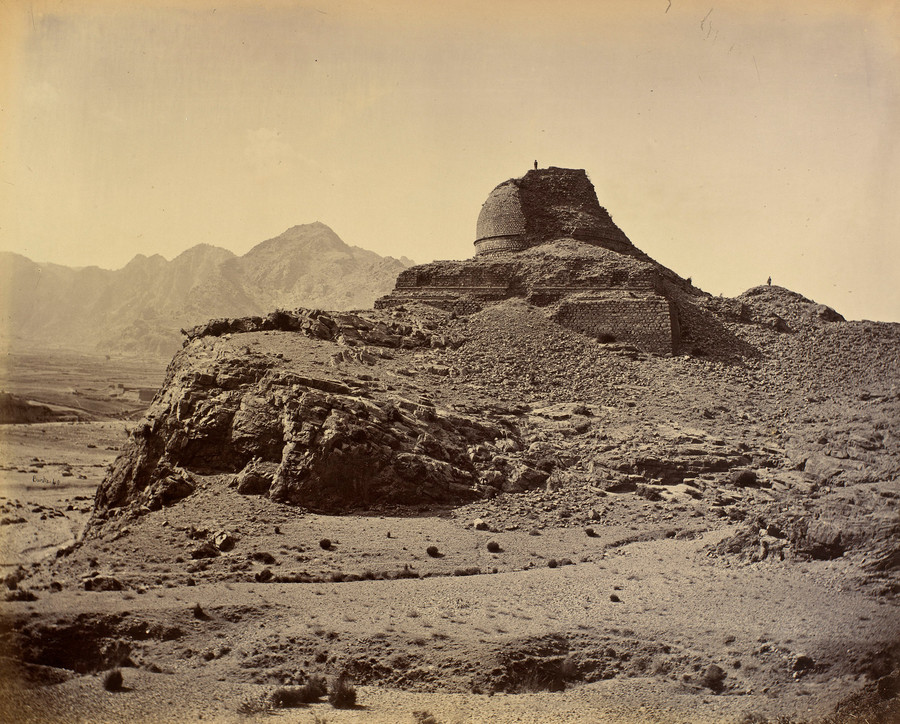 Photograph of the Buddhist monument Sphola Stupa in the Khyber Pass. The monument is on a high rocky ledge and consists of a stone mound supported by a tiered base. Large sections of the stone have fallen away, particularly to the right of the mound. A man is standing on the top of the mound, and another man is standing on a pile of rubble to the right. There is a valley beyond with steep mountains rising behind it. The photographer John Burke travelled with the Peshawar Valley Field Force during the Second Anglo-Afghan War (1878-80), one of a series of conflicts between Britian and Russia over control of Afghanistan. His images from the war capture landscapes, key strategic sites and soldiers involved in the conflict.

Provenance: From the collection of King Edward VII when Prince of Wales