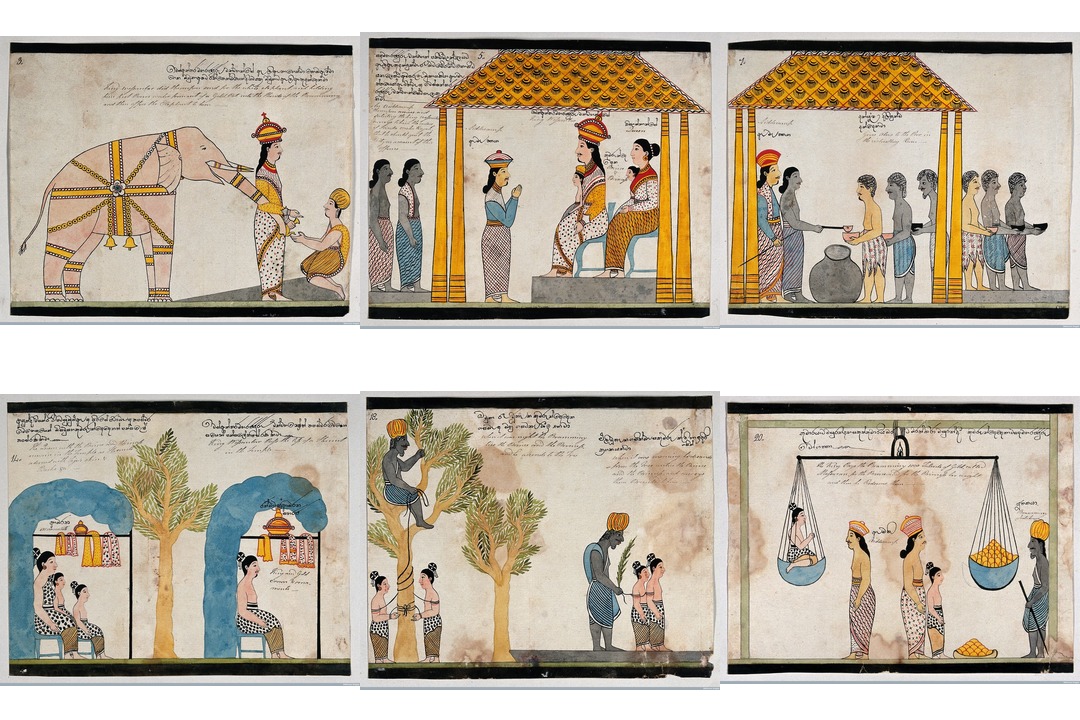 Episodes in the life of Prince Vessantara. Album of watercolours.

Extensive lettering in Burmese and/or Pali annotated with English translations

Episodes in the life of the prince known in Pali as Vessantara (in Tibetan as Dri-med-kun-Idan or Thams-cad-sgrol [Saviour of all, literally "Liberating all"], in Sanskrit as Viśvantara), prince of charity, who gave away his father's wish-fulfilling gem, his own wife and children and his own eyes. He is a form of the Buddha in a previous existence.

When he was eight years old, as he reclined on his couch, the boy thought to himself: “All that I give comes from without, and this does not satisfy me; I wish to give something of my very own. If one should ask my heart, I would cut open my breast, and tear it out, and give it; if one ask my eyes, I would pluck out my eyes and give them; if one should ask my flesh, I would cut off all the flesh of my body and give it.” And thus he pondered with all his being and the depths of his heart; this earth, forty thousand quadrillions of leagues in extent, and two hundred thousands of leagues in depth, quaked thundering like a great mad elephant; Sineru chief of mountains bowed like a sapling in hot steam, and seemed to dance, and stood leaning towards the city of Jetuttara; at the earth’s rumbling the sky thundered with lightning and rain; forked lightning flashed; the ocean was stirred up: Sakka king of the gods clapt his arms, Mahabrahma gave a sign of approval, high as Brahma’s World all was in uproar...

The Vessantara grew, his fame and generosity spread all over the country. Whatever was asked of him, he gave without hesitation. In the course of time, he married a virtuous lady called Maddi, who bore him two children, a son called Jali and a daughter called Kanhajina.

Now at that time, the country of Kalinga had a very bad drought which caused a great famine and hardship to the people. In order to bring rains to his land, the king of Kalinga, at the request of his people, sent four Brahmanas to the city of Jetuttara in the Sivi kingdom to fetch the auspicious elephant of Vessantara, which brought prosperity to the Sivi kingdom. When the Brahmanas asked Vessantara for his elephant, he gave it away. 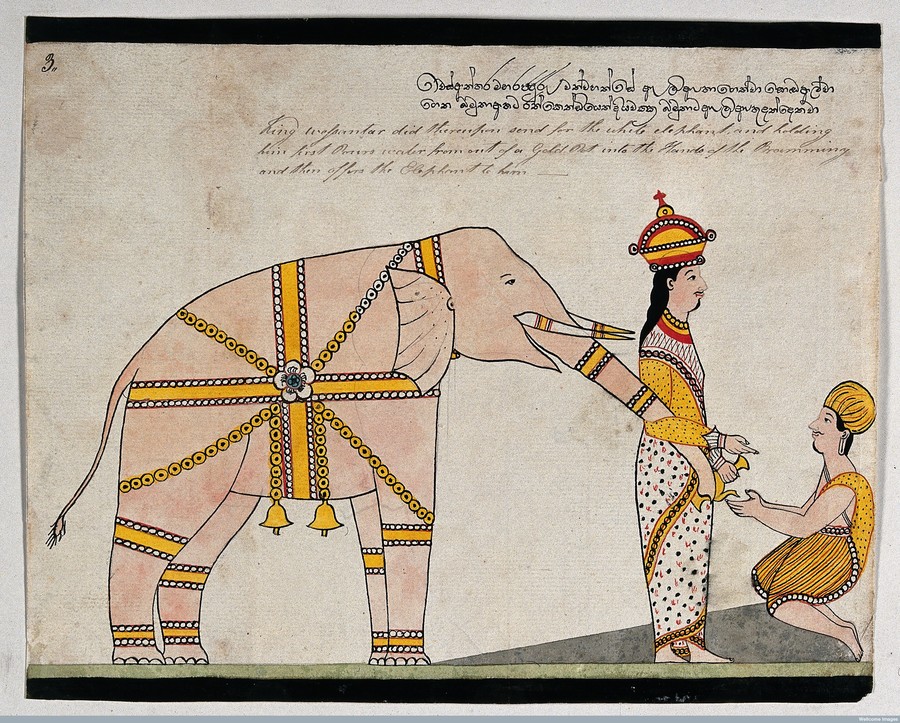 Prince Vessantara offers an elephant to the seven brahmins from Kalinga.
Wellcome Library no. 725907i

The crowd, beholding them, cried out, “O brahmins, mounted upon our elephant, why are ye taking our elephant?” The brahmins replied, “The great king Vessantara has given the elephant to us: who are you?” and so with contumelious gestures to the crowd, through the city they passed and out by the northern gate by aid of the deities . The people of the city, angry with the Bodhisat, uttered loud reproaches.

The Great Being said:

“Why are the people wroth with me? for no offence I see.
Tell me, good fellow, wherefore pray they wish to banish me?”

“Uggas and Vesiyas, charioteers, and brahmins every one,
Mahouts and lifeguards, charioteers and footmen, thither run,
All angry at thy giving gifts, and therefore banish thee.”

Hearing this, the Great Being, in all content, said:

“My very eye and heart I’d give: why not what is not mine,
Or gold or treasure, precious stones, or pearls, or jewels fine?

Comes any one to ask of me, I’d give my hand, my right,
Nor for a moment hesitate: in gifts is my delight. 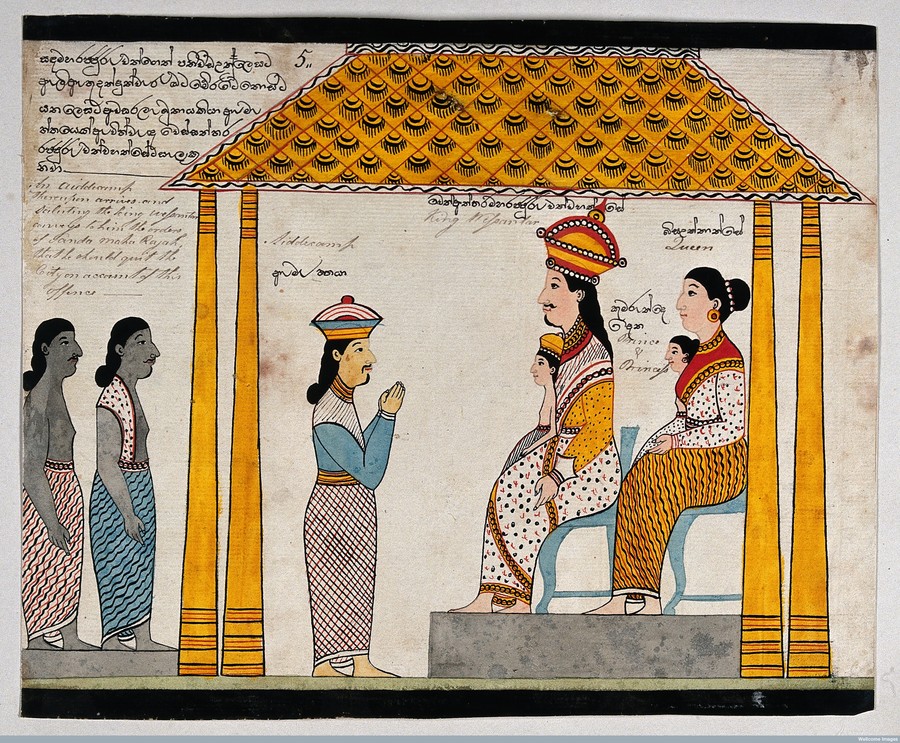 The representative of the people of Jetuttara requests Prince Vessantara to leave the city.
Wellcome Library no. 725909i

Now a deity told the news to the kings of all India: how Vessantara was giving great gifts of high-born maidens and the like. Therefore the Khattiyas by the divine power came in a chariot, and returned with the high-born maidens and so forth that they had received. Thus did Khattiyas, brahmans, Vessas, and Suddas, all receive gifts at his hands before they departed. He was still distributing his gifts when evening fell... 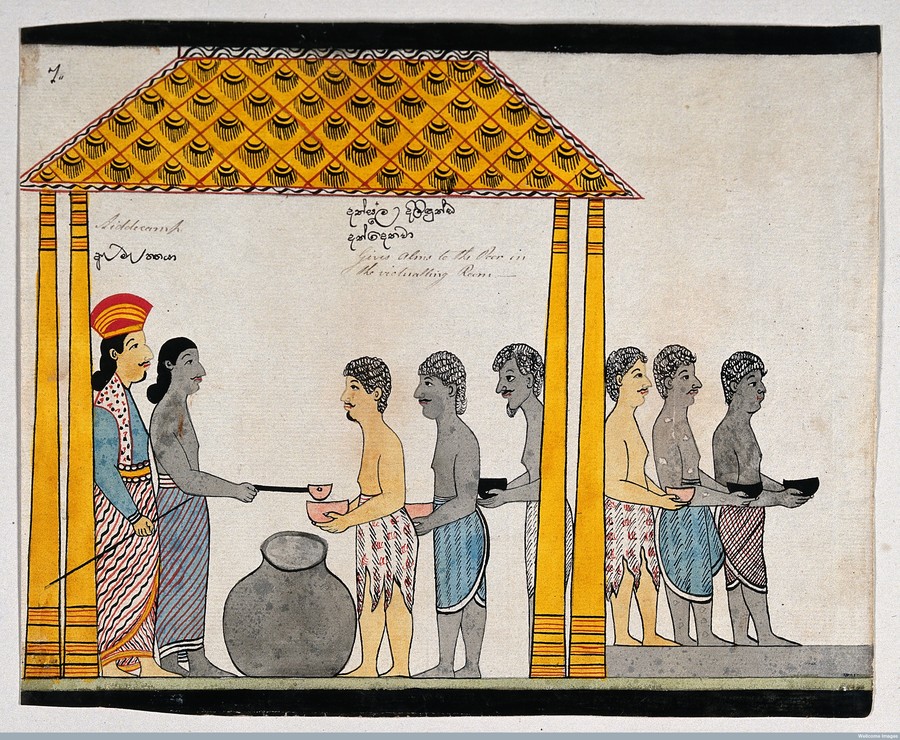 The representative of the people of Jetuttara gives alms to the poor in the victualling rooms.
Wellcome Library no. 725922i

At this moment, Sakka king of the gods looked down and beheld that which had happened. “The Great Being,” he thought, “has entered Himavat, and he must have a place to dwell in.”
So he gave orders to Vissakamma: “Go, pray, and in the dells of Mount Vamka, build a hermitage on a pleasant spot.” Vissakamma went and made two hermitages with two covered walks, rooms for the night and rooms for the day; alongside of the walks he plants rows of flowering trees and clumps of banana, and makes ready all things necessary for hermits. Then he writes an inscription, “Whoso wishes to be a hermit, these are for him,” and driving away all unhuman creatures and all harsh-voiced beasts and birds, he went to his own place.

The Great Being, when he beheld a path, felt sure that it must lead to some hermits’ settlement. He left Maddi and the two children at the entrance of the hermitage, and went in; when seeing the inscription, he recognized that Sakka’s eye was upon him. He opened the door and entered, and putting off his bow and sword, with the garments which he wore, he donned the garb of a hermit, took up the staff, and coming forth entered the covered walk and paced up and down, and with the quietude of a Pacceka Buddha approached his wife and children. Maddi fell at his feet in tears; then with him entering the hermitage, she went to her own cell and donned the ascetic dress. After this they made their children to do the like. Thus the four noble hermits dwelt in the recesses of Mount Vamka. 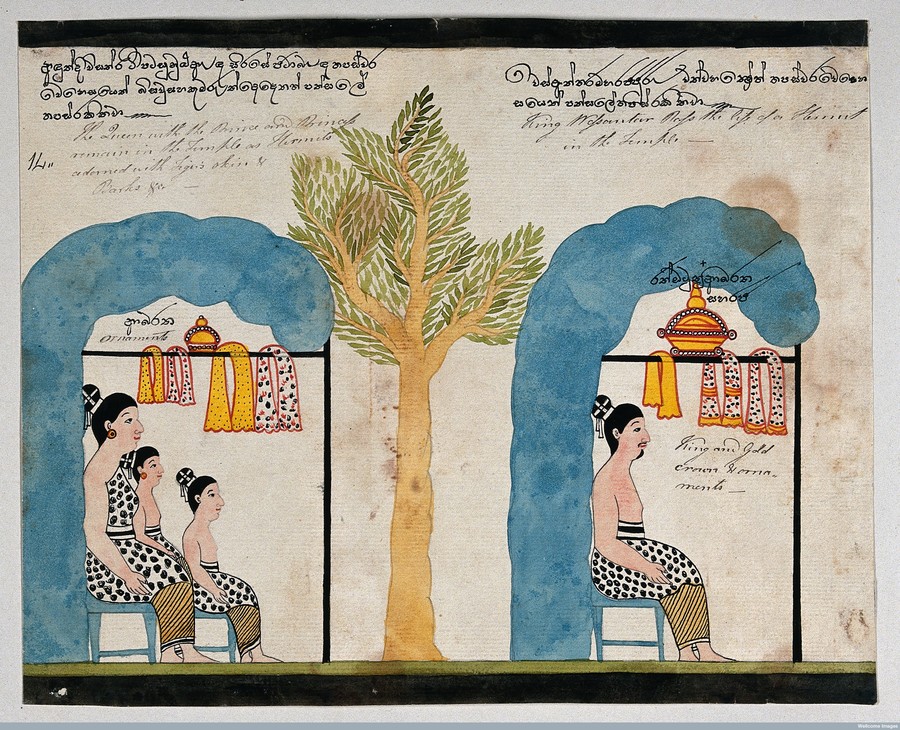 Prince Vessantara and his family live as hermits in separate temples.
Wellcome Library no. 725923i

Some time before, in the holy city of Varnasi, there had lived a very disagreeable and remarkably ugly Brahmin, named Jujaka, known to everyone for his extreme greed. One day his house had unexpectedly burned to the ground, probably because of his many evil deeds.

But Jujaka was a money-lender, and so he had come to Mount Vankagiri where there lived a couple who owed him money. Since they had none to pay him, he took instead their beautiful daughter Amittata to be his wife.

Amittata was a faithful wife to him because she had been well brought up and understood her duty, but he was very demanding, and at last, after enduring a good deal of teasing and scolding from the village women, she insisted that he ask for Jali and Kanhajina as servants.

After various adventures, the wicked Brahmin Jujaka arrived outside the hermitages where Prince Vessantara and his family were staying, and there he concealed himself to await the dawn. The next morning, Maddi went out into the forest to look for food for the family’s meals. After she had gone some distance, her way was blocked by three gods disguised as animals, who made her turn back. 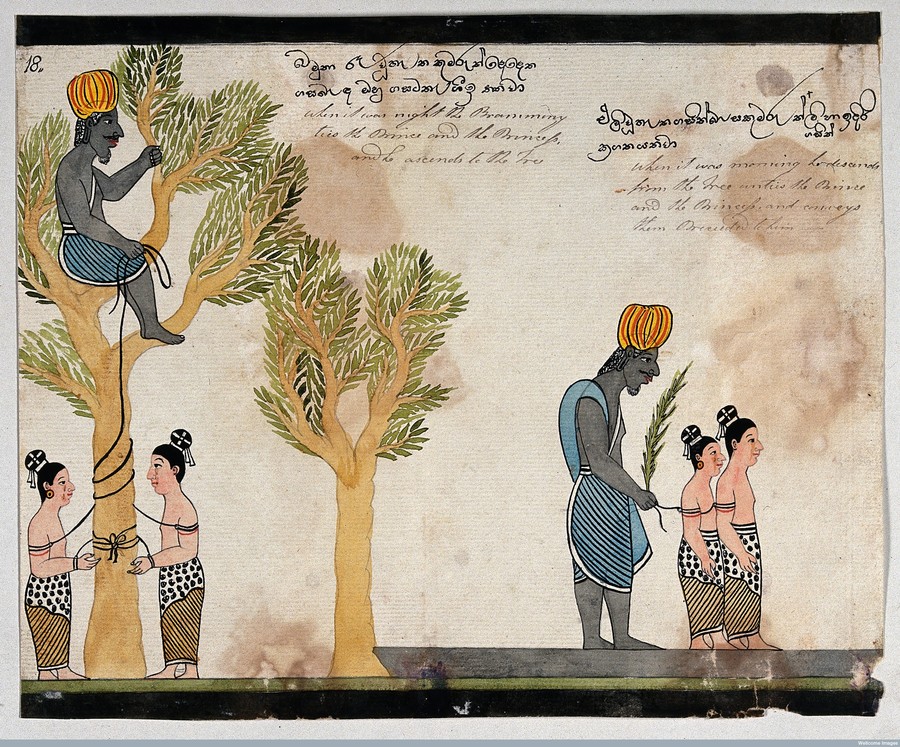 The brahmin, sitting in a tree, keeps the children of Vessantara tied up all night, and in the morning takes them on the road.
Wellcome Library no. 725924i

“My dearest children, speak not so; my heart is parcht with heat,
My body’s like a blazing fire, uneasy is this seat.

My dearest children, speak not so; you make me sorrow sore.
Come, I will buy you with a price, ye shall be slaves no more.

Come tell me truly as it is,—I will the brahmin pay—
What price your father set on you when he gave you away?”

“A thousand pieces was my price: to set my sister free,
Of elephants and all the rest a hundred each fixed he.”

The king bade pay the price for the children.

“Up, bailiff, pay the brahmin quick, and let the price be told:
A hundred male and female slaves, and cattle from the fold,
A hundred elephants and bulls, a thousand pounds in gold.’ 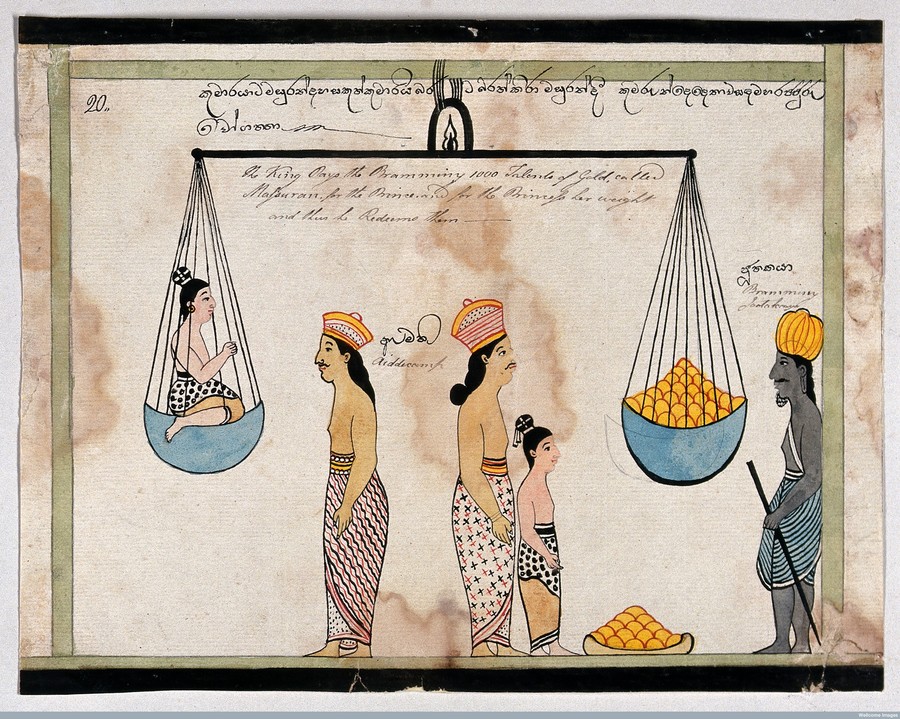 King Sanjaya redeems the children of Vessantara, paying to the brahmin the weight of the girl in gold.
Wellcome Library no. 725925i

Finally, promised by Sakka that he had attained perfection and would be born in his next life as Siddhartha Gautama, the Buddha, Prince Vessantara led his wife Maddi back to the palace at Jetuttara and became the king of the kingdom of Sivirattha, which worked out better this time because Sakka sent a rain of precious gems that fell from the sky and filled the palace so that Prince Vessantara could freely give great wealth to all who asked.

At the about same time, Peccaya the elephant was politely returned by the people of Kalinga, who had more rain than they wanted, which brought great joy both to Sivirattha and to Peccaya, who was glad to be back. 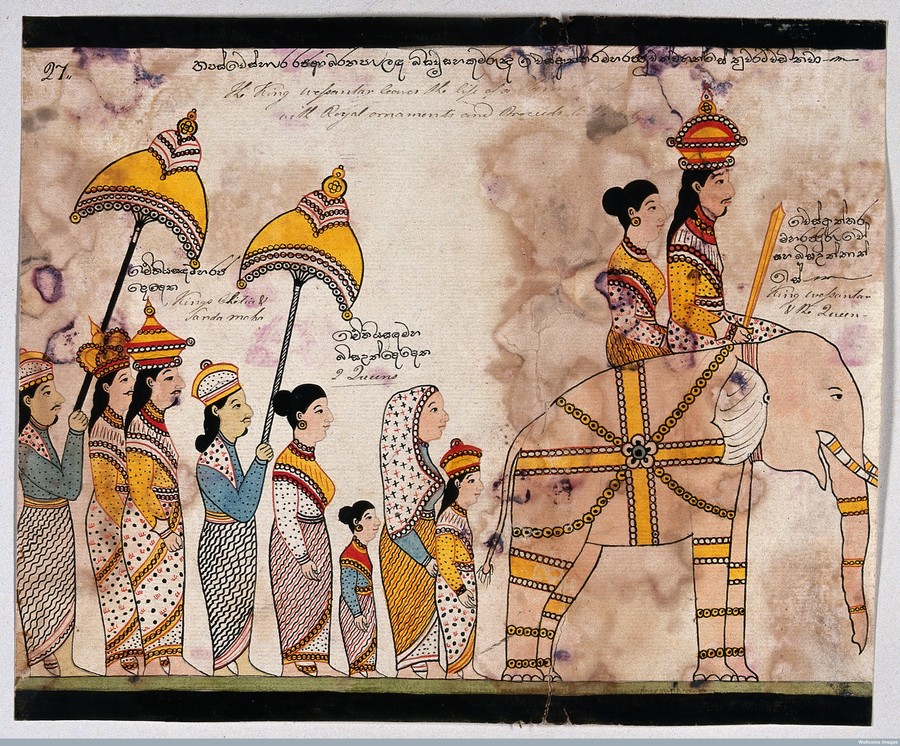 Prince Vessantara leaves the life of a hermit and returns to the city.
Wellcome Library no. 725951i