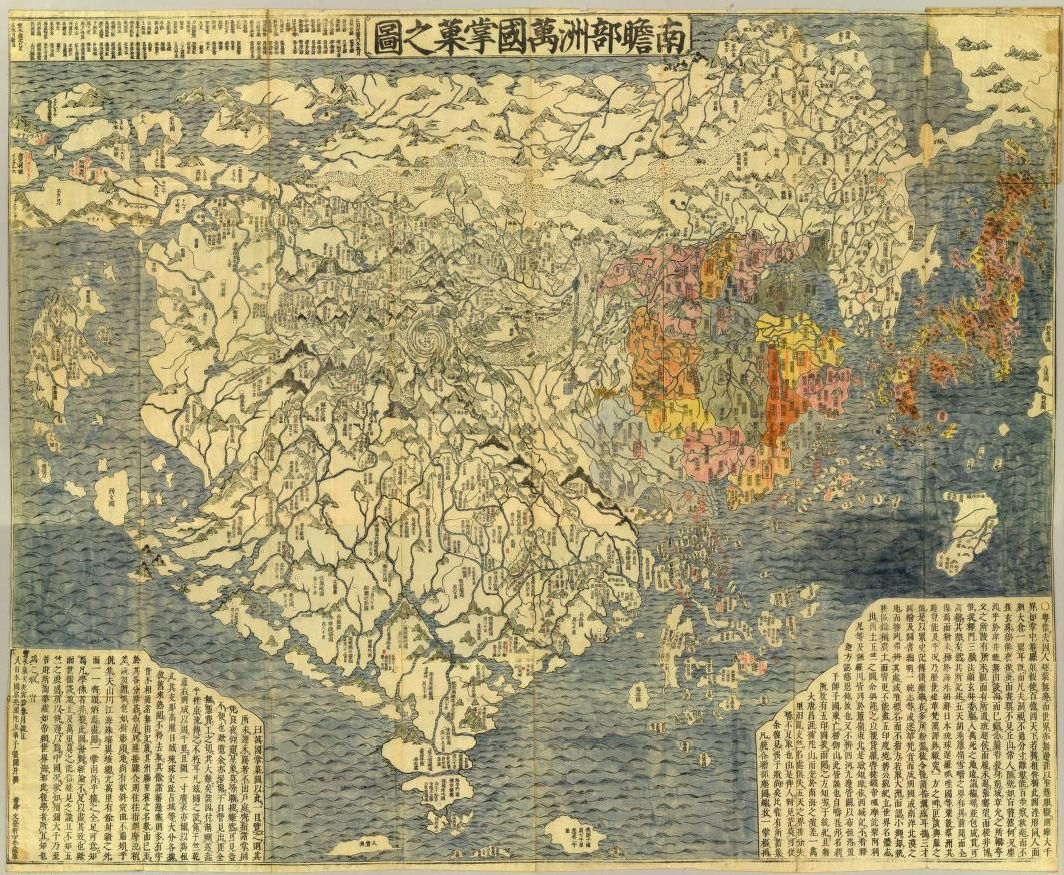 Wood block print. Hand colored. In Chinese with Japanese annotations in red ink. Shows the world based on Buddhist literature from India and China. This map is based on a Buddhist conceptual view of the world with India at the center, yet it includes contemporary European geographical knowledge -- Europe is shown as a group of islands in the upper left corner and South America is an island in the ocean south of Japan on the right side. The map has many place names in Asia not found on European maps of the period. In the center of the map in the Himalayan Mountains is a quadruple helix symbolizing the origins of the four great rivers of the region (the Indus, the Ganges, the Brahmaputra and the Sutlej rivers) emanating from the heads of a horse, a lion, an elephant, and an ox. This is the site of the present day Lake Manasarovar, the highest fresh water lake in the world. "A land bridge connects China to an unnamed continent in the upper right corner ..."--Cortazzi. Relief shown pictorially. Bibliography. Title in Nihon kohan chizu shusei: Nanzenbushu bankoku shoka no zu. Folded in cover 24x19. Has annotations in red ink.

Jambudvipa is the Indian name for the great continent south of the cosmic Mount Meru, the archetypal pilgrimage site. Anavatapa, the great lake at the center of the world, is marked like the vortex of a powerful tornado near the center of the great landmass that stretches across the page. Drawn by a Japanese Buddhist monk of the Kegon sect and published in Kyoto in 1710, this map is based on earlier Japanese Buddhist world maps that illustrate the pilgrimage to India of the Chinese monk Xuanzang (602–664). Hotan has not drawn the route of this famous pilgrim here, but the toponymy of India and Central Asia accords with Xuanzang's account. 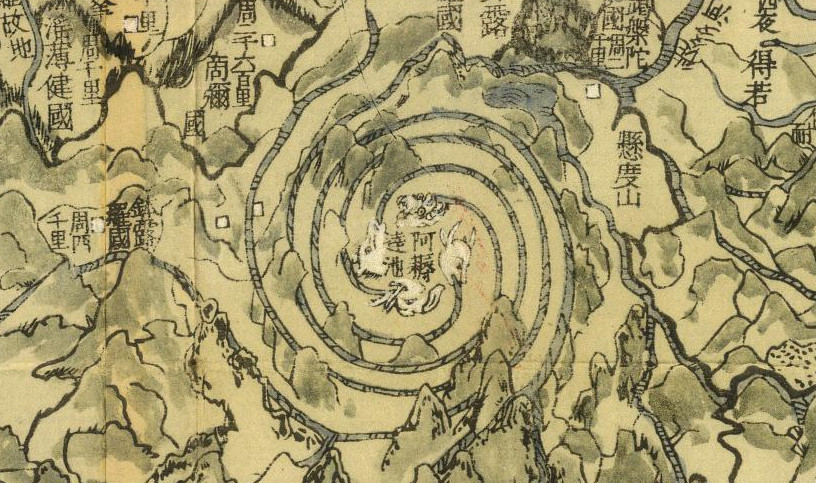 While this map represents a significant step forward in the Japanese attempt to combine religious and contemporary geographic knowledge it remains in essence a Buddhist map. It is likely that Rokashi Hotan was aware important European style maps circulating in China at the time. The Mateo Ricci map (#441) is one such example and copies were known to have reached Japan in the 17th century. It is curious that Rokashi Hotan chose to ignore it and other Eurocentric data in exchange for a religious world-view, while at the same time attempting to reconcile Buddhist and modern geography. It should be noted that at the time of its production, Japan maintained an isolationist policy that began in 1603 with the Edo period under the military ruler Tokugawa Ieyasu, and lasting for nearly 270 years. Although knowing the world map by Matteo Ricci, published in Peking in 1602, Japanese maps mainly showed a purely Sino-centric view - or with acknowledgement of Buddhist traditional teaching - the Buddhist habitable world with an identifiable Indian sub-continent. Ultimately, this map makes a lot more sense when one understands that Rokashi Hotan scaled his world map not by distance but rather by religious importance. India, the birthplace of the Buddha, is the central locale in the Jabmu-Dvipa conception and on this map. Other countries, including China, Japan itself, and even more so the distant continents of Africa, Europe and the Americas, Rokashi Hotan considered “but mote-like countries in the Jambu-Dvipa” and “as small as a millet-grain”.

#510 Title: Nansenbushu Bankoku Shoka No Zu [Outline Map of All Countries of the Universe]

Of special note is Rokashi Hotan’s mapping of the Americas. Prior to this map America had rarely if ever been depicted on Japanese maps, so Rokashi Hotan turned to the Chinese map Daimin Kyuhen Zu [Map of China under the Ming Dynasty and its surrounding Countries], from which he copied both the small island-like form of South America (just south of Japan), and the curious land bridge (the Aelutian Islands?) connecting Asia to what the Japanese historians Nobuo Muroga and Kazutaka Unno conclude “must undoubtedly be a reflection of North America”. Whether this represents ancient knowledge from early Chinese navigations in this region, for which there is some literary if not historical evidence, or merely a printing error, we can only speculate.

Cartographic Images #510 Title: Nansenbushu Bankoku Shoka No Zu [Outline Map of All Countries of the Universe] 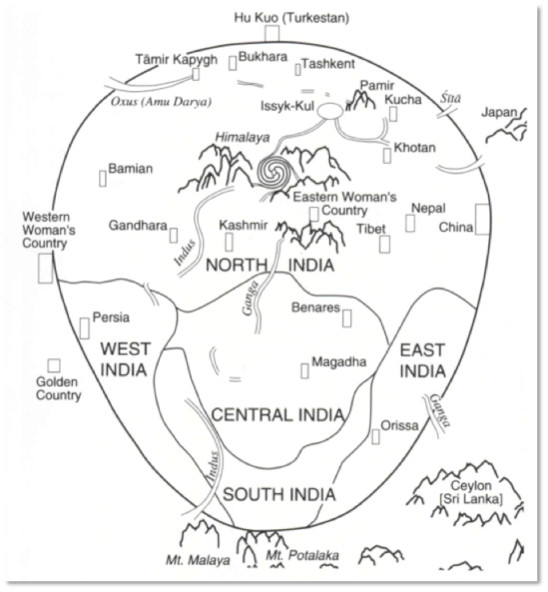 Interpretative drawing of the Gotenjiku Zu [Map of the Five Regions of India]. This traditional Buddhist depiction of the civilized world (mainly India and the Himalayan regions, with a token nod to China) divides India into five regions: north, east, south, west and central India. Each of these five regions is again divided into many kingdoms – those current during the career of Buddha. The Himalayas are shown as snow-capped peaks in the center of the map, and Mount Sumeru, the mythical center of the cosmos, is depicted in the whirlpool-like form. A much reduced China (Chang’an is visible on the plain at the upper right) is labeled “Great Tang”. Directly across from China, over the stormy seas, the islands of Kyushu and Shikoku and the form of Honshu can be detected. 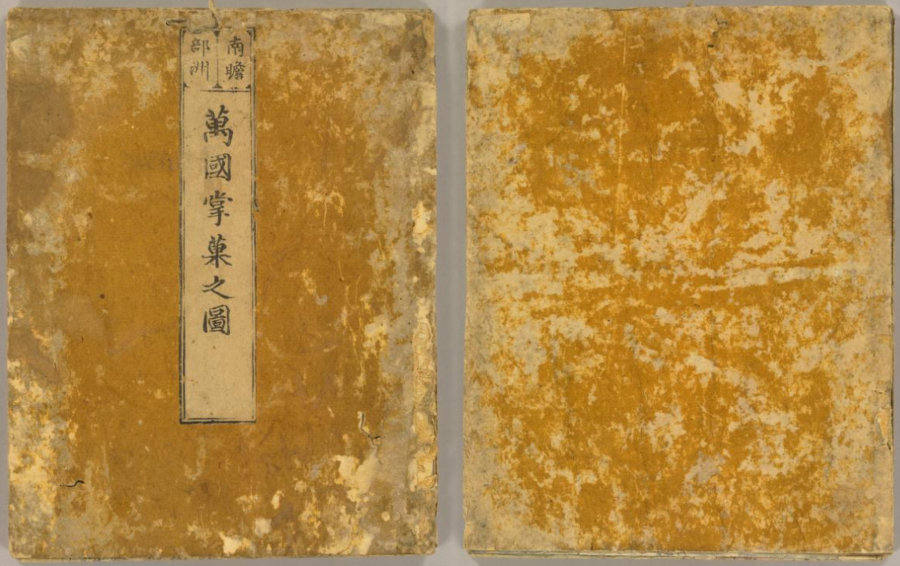 opendharma
RSS
More posts by opendharma.
Mes Aynak
Mes Aynak in Logar Province, Afghanistan on Saturday, October 29, 2011 | US Embassy Kabul Afghanistan [https://flic.kr/p/aAx6Ta] > In the spring of 1963, a French geologist set out from Kabul to carry out a survey in Logar province in eastern Afghanistan. His destination was the large outcrop of
Cutting the hair (ဆံချ)
A barber cutting a young boy's hair at a Buddhist monastery in Burma. Halftone after a photograph by R. Grant Brown. မြန်မာဘာသာ: ဆံချပေးနဲ့သည့်မိသားစုနှင့် ရှင်လောင်းကို တွေ့ရစဉ်။ > Cutting the hair. Every Burman must enter