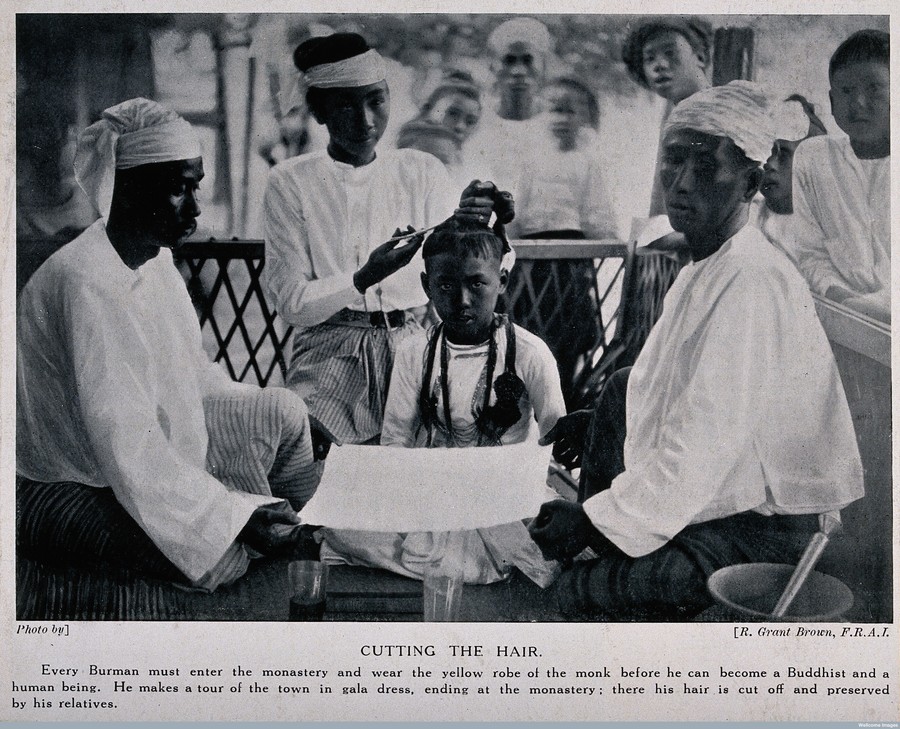 A barber cutting a young boy's hair at a Buddhist monastery in Burma. Halftone after a photograph by R. Grant Brown.

Cutting the hair. Every Burman must enter the monastery and wear the yellow robe of the monk before he can become a Buddhist and a human being. He makes a tour of the town in gala dress, ending at the monastery: there his hair is cut off and preserved by his relatives.

Buddhist monks are so far from being a separate caste that every Burman boy must, if only for a few hours, wear the yellow robe and submit himself to monastery discipline, which includes at least a show of begging one's food and
entire abstention from eating after midday. The ceremony of initiation is an elaborate one. The boy is first taken in procession round the town, gaily dressed and mounted on a pony, which should be a white one. On his return the saint Upagupta is asked to keep the evil spirits from him, and with the same object he is sprinkled with water by means of a sprig of the bay-tree, his hands are washed in water in which bay-leaves have been steeped, and a white thread is tied on his wrist, while all the time sacred texts are uttered in a loud voice. The bay-tree brings good luck; and until he has put on the yellow robe the boy is in great danger from evil spirits, who are jealous at seeing him about to go out of their power. Various delicacies are then offered to him, and if accepted are placed in his mouth, for he must do nothing himself. Music and dancing and a dramatic performance follow. After he has thus taken his fill of worldly pleasures, his hair is cut, his head is shaved, and his bright attire is stripped off him and replaced by the coarse yellow robe of a mendicant.

The Brotherhood consists of two classes — the Novices, who have Ten Precepts to observe (the Eight Precepts before given, one of which here is divided into two, thus making nine of what were given as eight ; and in addition a precept as to abstaining from the acceptance or use of money, or of gold or silver in any form). Any male above seven years of age may be ordained as a Samanera, or Novice; and in general practice in Burma, every boy so enters the Monastery and undergoes its discipline at some age between seven and twenty. Any Bhikkhu can ordain a Samanera, but only with the consent of his parents or guardians if a child; and, once ordained, the Novice can leave the Order at will at any time. He wears the Yellow Robe, takes food like the Monks, only before noon ; and may own no property except such as is allowed to the Monks themselves. A Burmese lad is generally put into the Novitiate by his parents for a period of a few months, or a year or so; and thus well-nigh every man in the country has lived some time in the Monastic Order — a fact on which the immense esteem in which the Monk is held largely depends. Every man has lived in immediate contact with the Brotherhood, and is personally acquainted both with the high standard of purity and holiness and of learning therein maintained; he also has practical experience of the restraints — so hard to a young and eager people like the Burmese — involved in the monastic life.

opendharma
RSS
More posts by opendharma.
Nanzenbushu bankoku shoka no zu, 1710
Nanzenbushu bankoku shoka no zu. Rokashi. Hoei 7 (1710) Engraver or Printer: Bundaiken, Uje Publication Author: Hotan, 1654-1738 Pub Date: 1710 Wood block print. Hand colored. In Chinese with Japanese annotations in red ink. Shows the world based on Buddhist literature from India and China. This map is based on
The Cosmic Buddha in 3D
Body of Devotion: The Cosmic Buddha in 3D January 30, 2016–July 9, 2017 Arthur M. Sackler Gallery Body of Devotion | Freer and Sackler Galleries Scholars have identified the headless figure as Vairochana, the Cosmic Buddha (Pilushena in Chinese). The iconography of the narrative scenes that cover its form-fitting robe

Or subscribe via RSS with Feedly!
© 2021 open dharma · All Right Reserved · Published with Ghost
Thanks for Subscribing