Scholars have identified the headless figure as Vairochana, the Cosmic Buddha (Pilushena in Chinese). The iconography of the narrative scenes that cover its form-fitting robe represents the life of the Historical Buddha as well as the “Realms of Existence,” a symbolic map of the Buddhist world. In Buddhist texts, Vairochana is described as the generative force behind all phenomena in the universe. He is also a central figure in the Chinese schools of Tiantai and Huayan. The narrative scenes are spiritual emanations rising from the Buddha himself and illustrate fundamental Buddhist teachings. These scenes originally would have been painted, as suggested by the slight traces of pigment that remain. 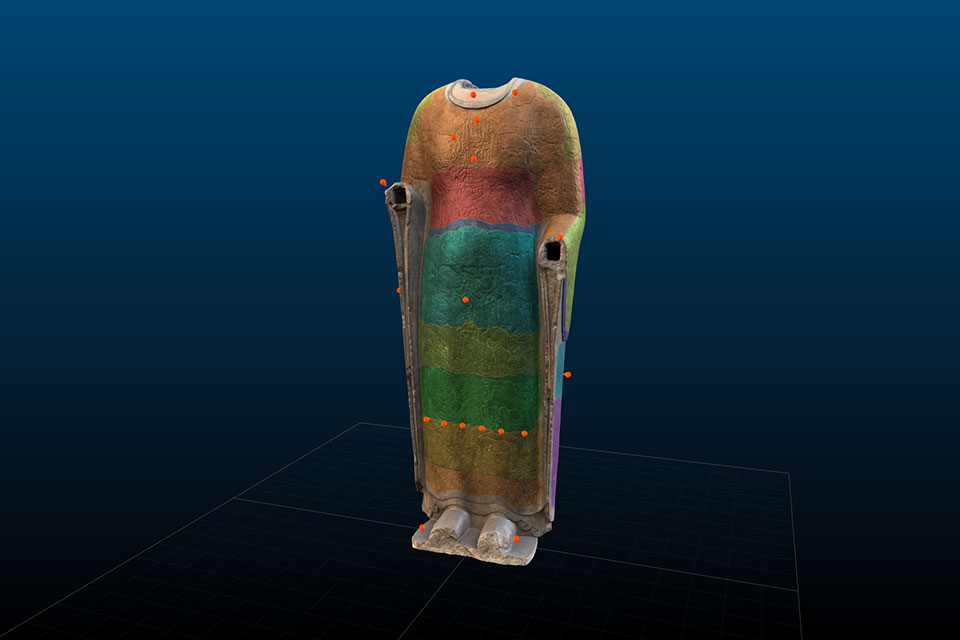 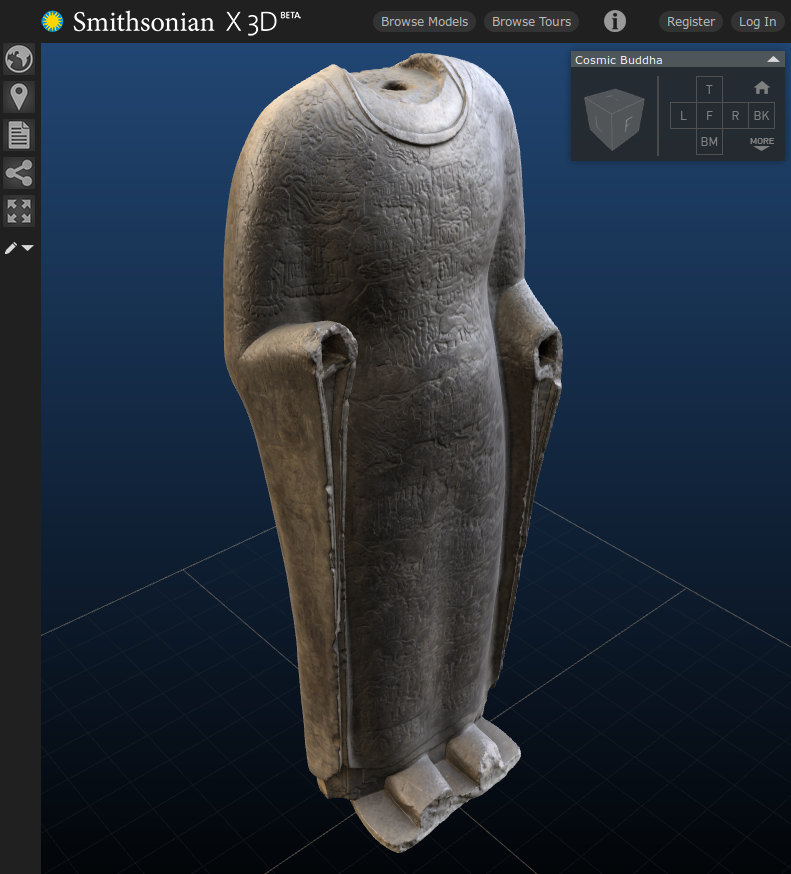 Like all Buddhas (fully enlightened beings), this life-size limestone figure is wrapped in the simple robe of a monk. What makes this object exceptional is the detailed narrative scenes that completely cover its surface like a magical emanation from within the sculpture. Several of the illustrations are based upon the past lives of the Historical Buddha, which leads some scholars to identify the figure as Shakyamuni himself. Others argue it represents Vairochana, the Cosmic Buddha, who is mystically linked with Shakyamuni. The depiction of the Buddhist “Realms of Existence,” a symbolic map of the Buddhist universe, on the front of the figure offers the primary basis for this second identification.

Descriptions of Vairochana are found in the Avatamsaka sutra. Known as Huayan in Chinese or Flower Garland in English, this religious text describes the infinity of the universe and introduces Vairochana as the generative force behind all phenomena, including Shakyamuni. Vairochana became the central figure in the Chinese schools of Tiantai and Huayan Buddhism and is closely associated with esoteric or Tantric Buddhist beliefs in later texts.

The entire Cosmic Buddha (left) is covered with intricate scenes that are difficult to discern with the naked eye, as seen on the shoulder. Rubbings on paper (F1980.86.1d) bring out more details, while the 3D scan with digital surface occlusion (right) provides the clearest view of the sculpture’s surface.

The scans’ clarity makes it easier than ever to map the surface and more clearly identify the borders of scenes and the figures they contain. Spatial depth in the narrative units is created through diagonals, vanishing points, and layered landscapes. By looking at 3D prints, scholars can now study these scenes for their artistic merit in a manner similar to paintings. The prints might help elucidate early Chinese narrative illustration and provide vital insight into the visual culture of sixth-century China.