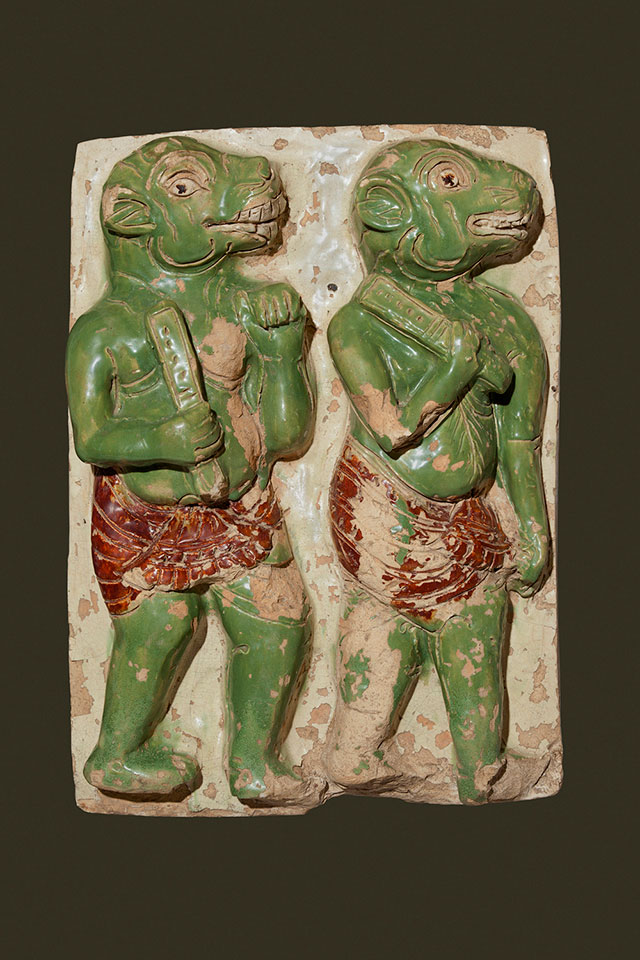 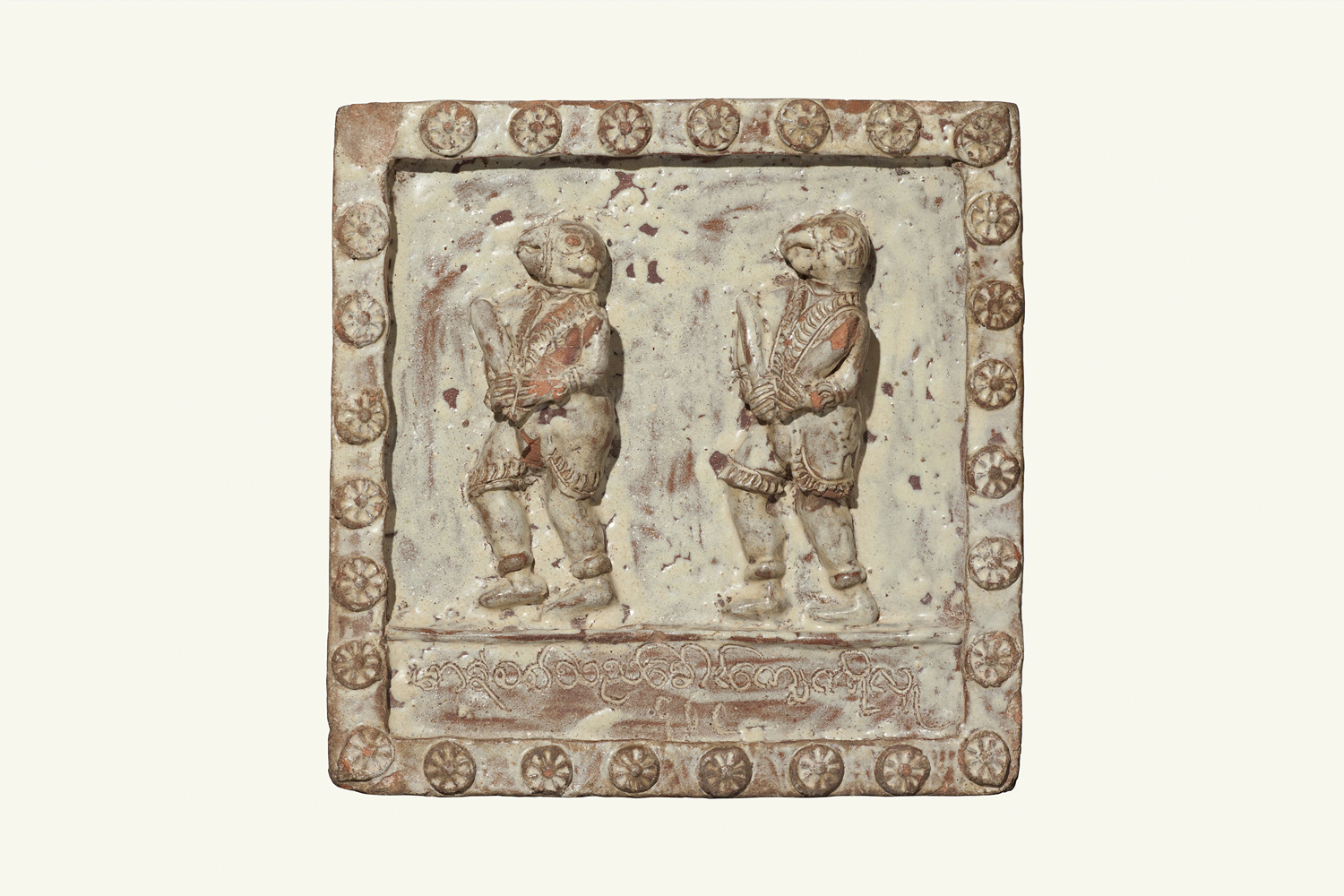 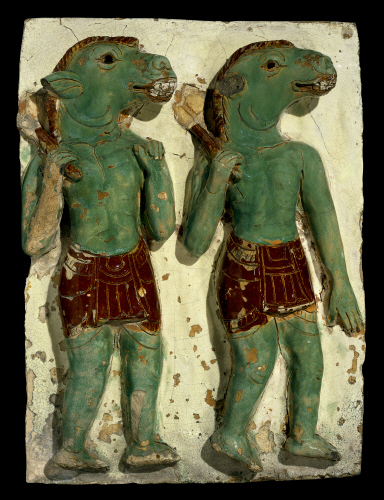 Glazed ceramic tile
© The Trustees of the British Museum
00031547001
Height: 20 inches
From Burma (Myanmar), 15th century AD
Demons from the army of Mara defeated by the Buddha

This glazed ceramic plaque depicts two ass-headed demons from the army of the god of death, Mara. While the Buddha was meditating under the bodhi tree at Bodh Gaya, Mara sought to prevent him from attaining enlightenment. He sent armies of demons to dislodge the Buddha by force, and his beautiful daughters to try and tempt the Buddha from this meditation. Finally, the Buddha called upon the Earth-goddess to witness his claim to enlightenment. The Earth shook and Mara fled. Seated Buddha images touching the earth (bhumisparshamudra) refer to this event, and are very popular in Burmese and Thai art from the eleventh century.

Glazed pottery tiles were used on temples at the Burmese capital at Pagan (about 1044-1287). They depicted scenes from both the jatakas (the stories of the previous lives of the Buddha) and the Buddha's life. This tile is of the type placed in niches at the Shwegugyi pagoda at Pegu, built in the later fifteenth century in lower Burma. Other tiles depict pairs of women who came to seduce the Buddha, illustrating the events described above. Pegu was the capital of the Mon kingdom of lower Burma between 1369 and 1539. The Shwegugyi temple and its shrines was built to replicate the topography of the Mahabodhi temple at Bodhgaya, the site of the Buddha's enlightenment. It was one a number of copies of the Mahabodhi temple built in Burma and Thailand between the thirteenth and fifteenth centuries. 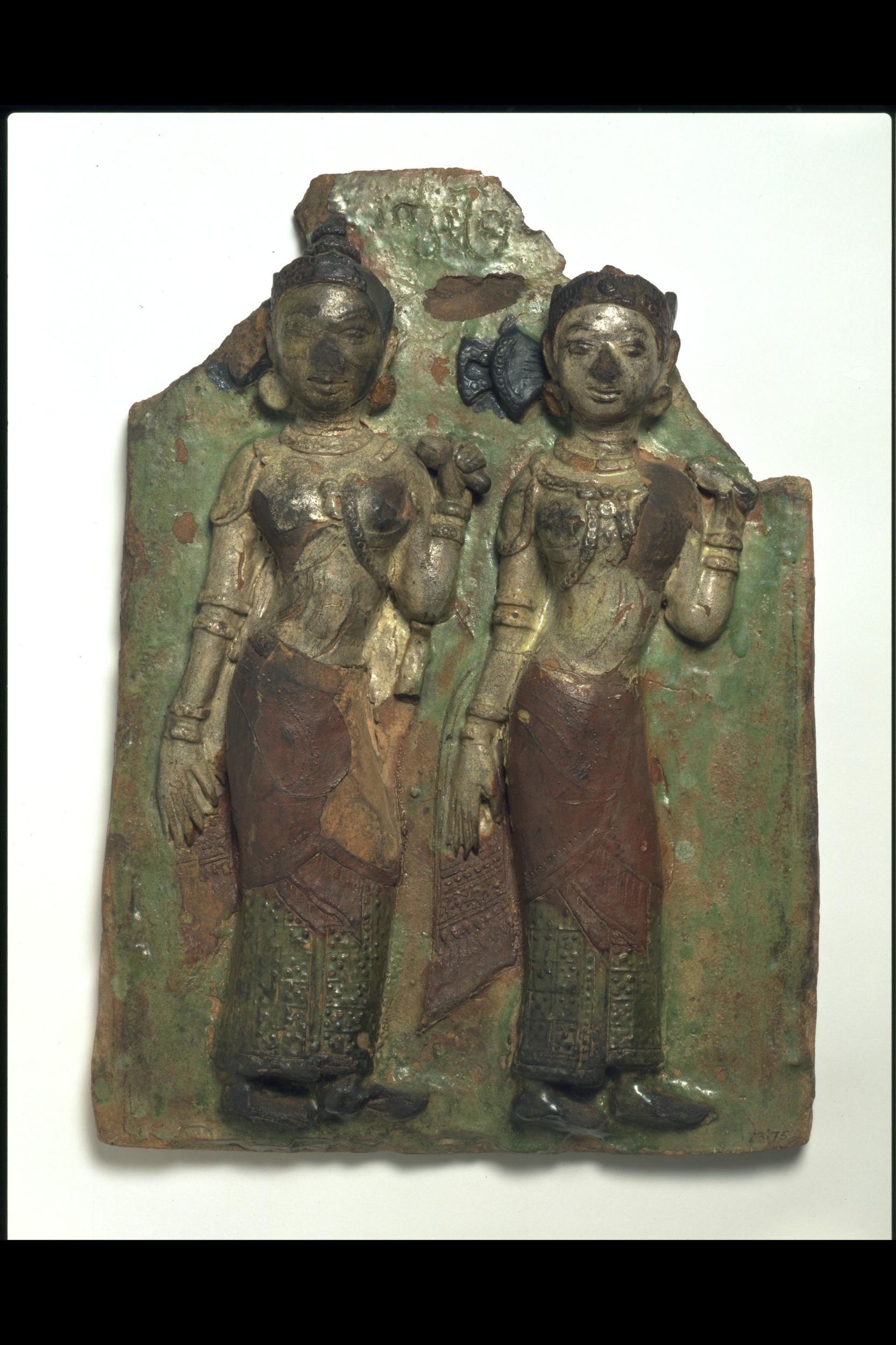 This ceramic plaque depicts two of the daughters of Mara elegantly posed against a green background. They are wearing decorative red and green garments and elaborate headdresses and jewellery, each with one hand to her side, the other raised and holding a fan. The plaque probably formed part of a larger series illustrating the Buddha's triumph over evil and the rout of Mara's army. The army was placed around the base of the Shwegugyi pagoda in Pegu to disrupt the Buddha while he meditated and sought enlightenment. It may have been combined with another series showing part or all of the Jataka stories (a series of tales recounting the Buddha's previous lives).

The practice of decorating pagodas with glazed terracotta plaques modelled in relief with Jataka scenes probably began in Burma in the Mon capital of Thahton. It was brought to Pagan by the Burmese king Anirhuddha about the middle of the 11th century, and their use there, as in Pegu in the later 15th century, was probably as much educational as decorative. 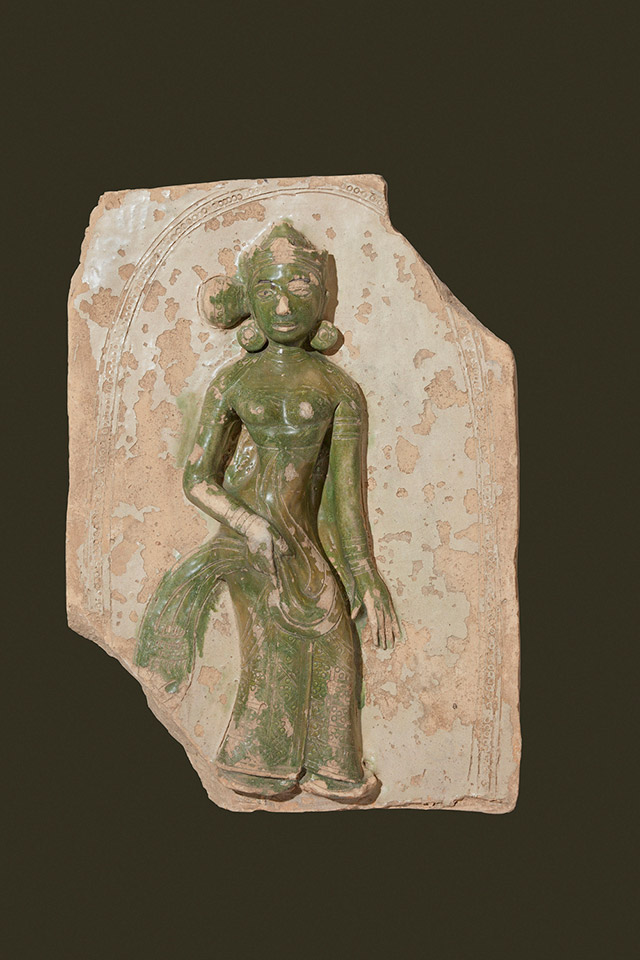 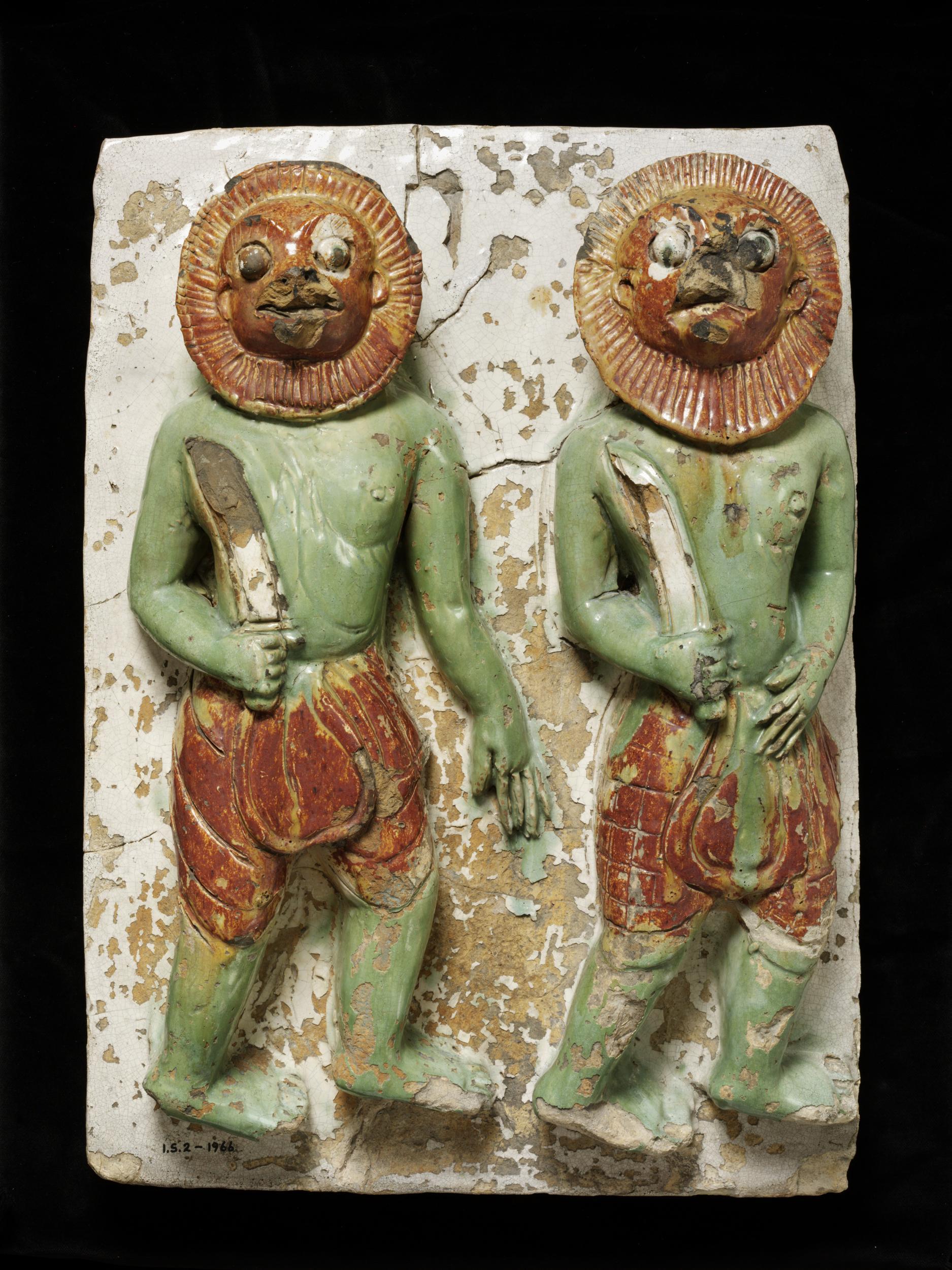 Tile depicting the warriors of Mara. The pious king Dhammaceti (r.1472-92) of Pegu built a series of temples to honour the life of the Buddha. The most distinguished was the temple complex of Shwegugyi, built in 1476. It was decorated with an extensive series of large-scale glazed tiles, many of which illustrated the demonic warriors of Mara's army, sent to disrupt the Buddha's meditation immediately prior to his Enlightenment. This tile, with owl-headed figures bearing swords, is typical of this series. 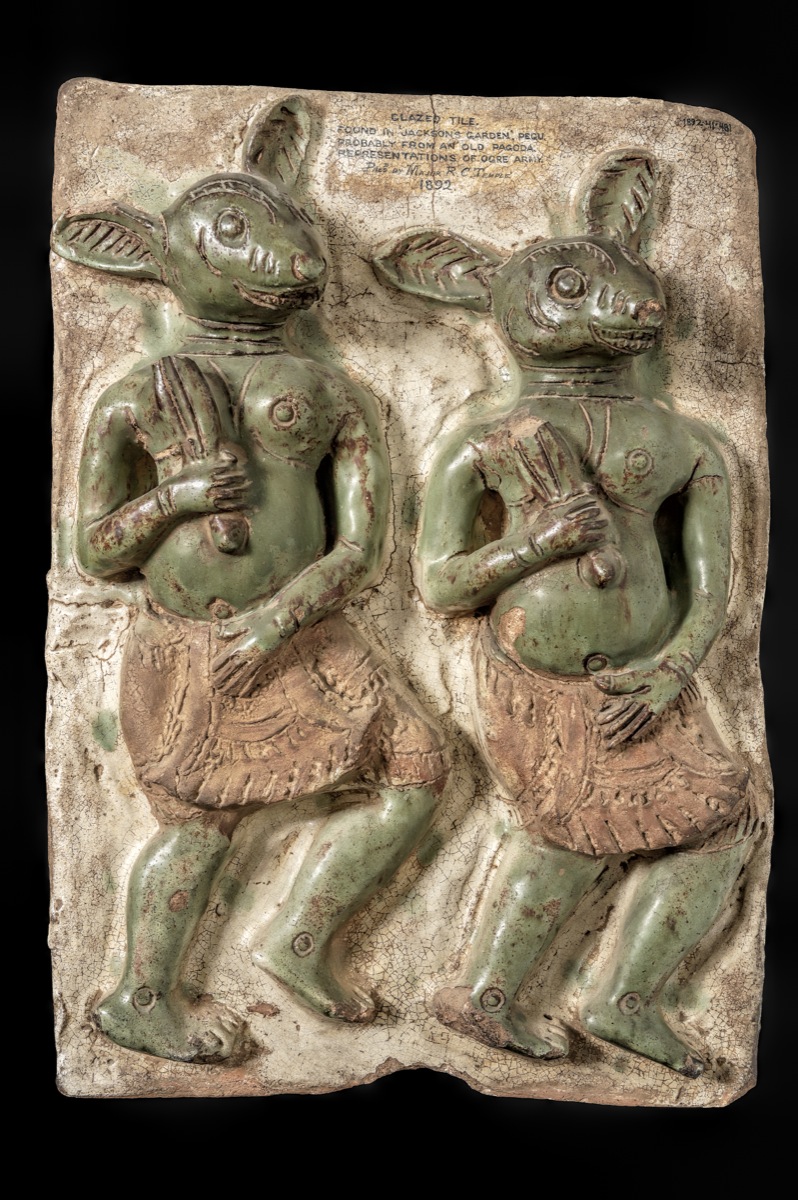 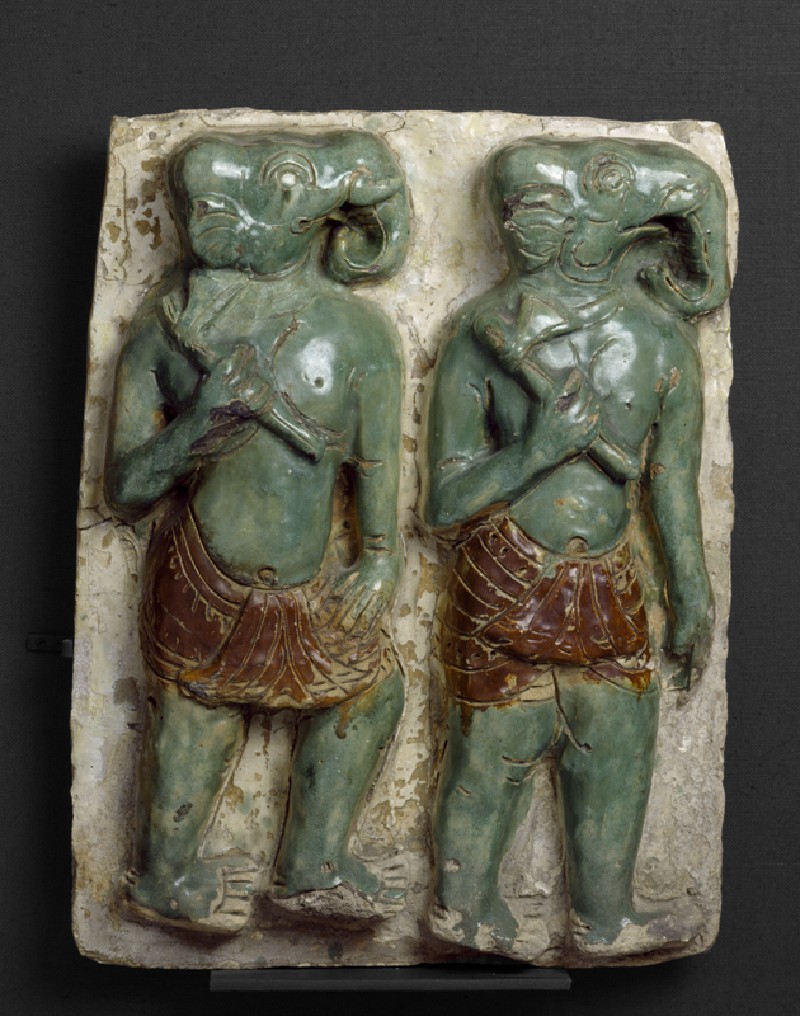 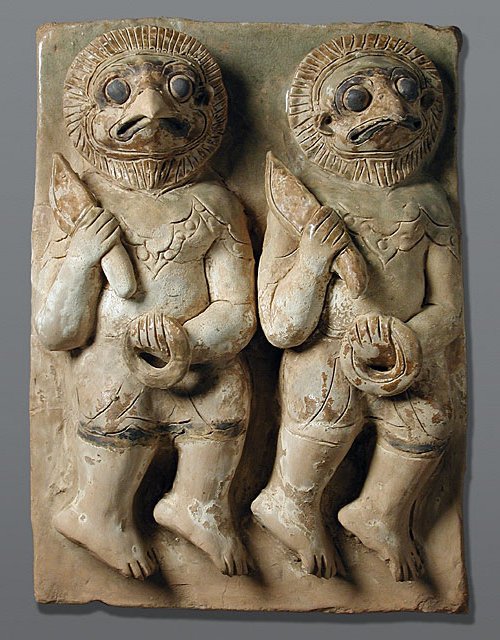