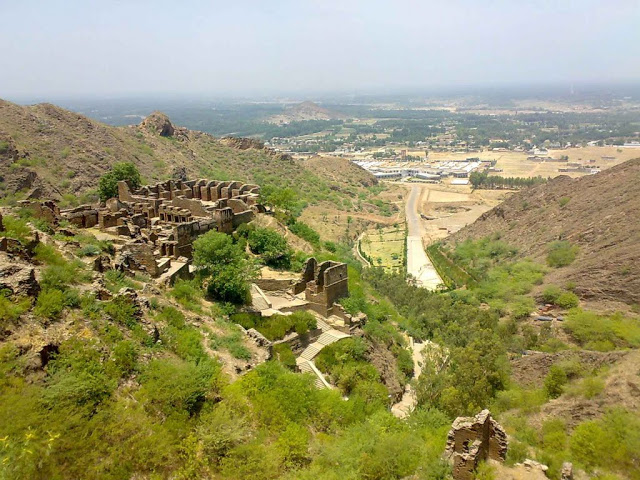 The Buddhist Ruins of Takht-i-Bahi and Neighbouring City Remains at Sahr-i-Bahlol are one of the most imposing relics of Buddhism in the Gandhara region of Pakistan. The inscribed property is composed of two distinct components both dating from the same era.

The Buddhist Ruins of Takhi-i-Bahi (Throne of Origins) are a monastic complex, founded in the early 1st century A.D., is spectacularly positioned on various hilltops ranging from 36.6 metres to 152.4 metres in height, typical for Buddhist sites. The complexes cover an area of around 33ha.

The Buddhist monastery was in continual use until the 7th century AD. It is composed of an assemblage of buildings and is the most complete Buddhist monastery in Pakistan. The buildings were constructed of stone in Gandhara patterns (diaper style) using local dressed and semi-dressed stone blocks set in a lime and mud mortar. 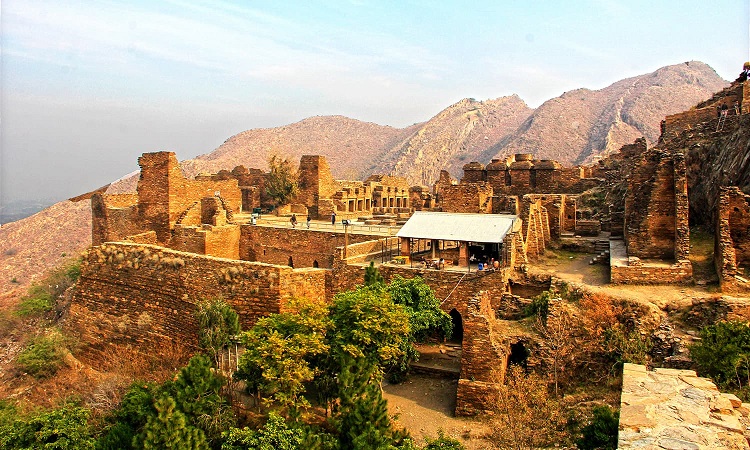 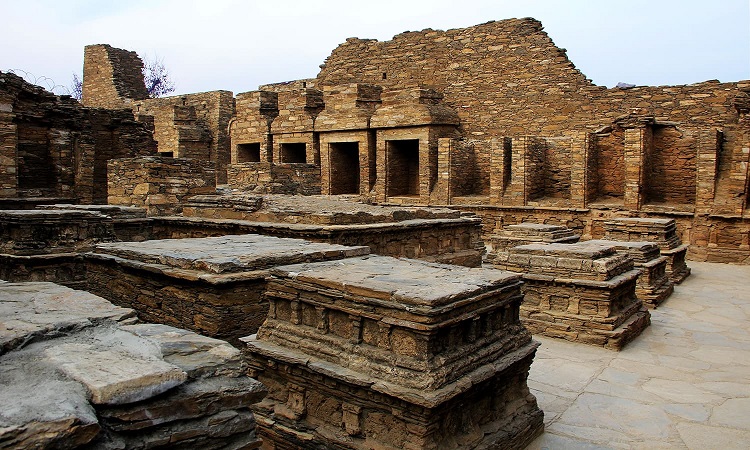 Few of the recent discoveries in India promise to be more fruitful of important results afor the elucidation of the archaeology of India than those obtained from the recent excavation of ruined monasteries in the neighbourhood of Peshawur. A great deal still remains to be done before we can speak with certainty with regard either to their age or origin, but enough is known of them to make it certain that the materials there exist for settling not only the question of
the amount of influence classical art exercised on that of India, but also for solving many problems of Buddhist archaeology and art. 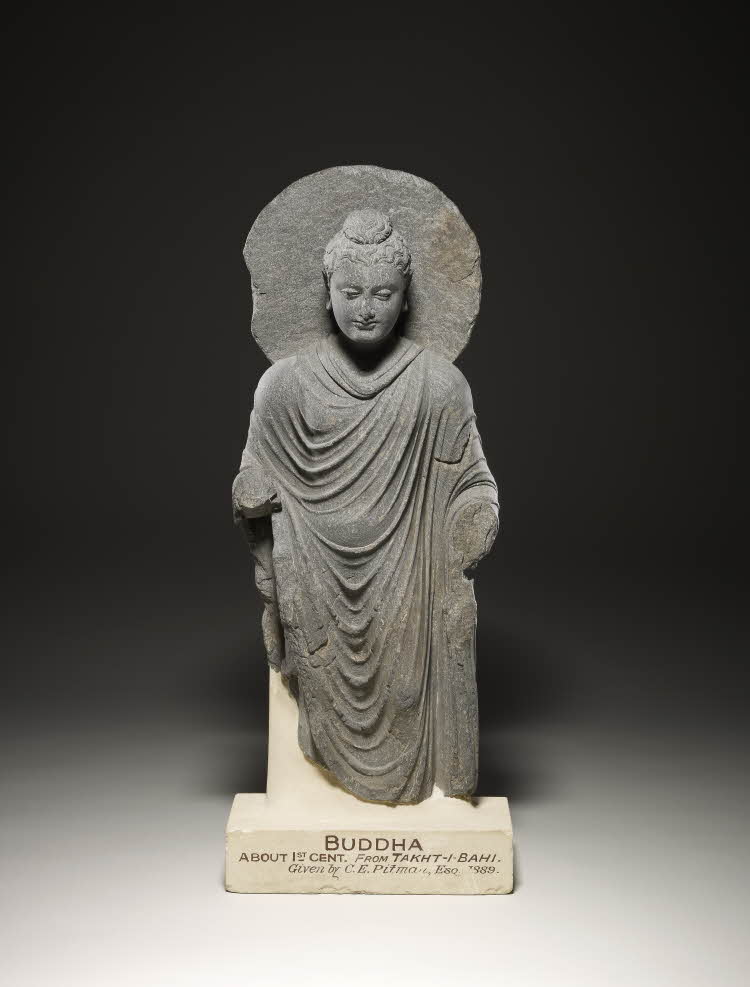 Standing Buddha, originally in 'abhaya-mudra'. A thick neckline shows the backthrow, and the dense drapery folds run in finely rounded thin ridges, in prominent relief between the legs. A hint of the antaravāsaka girdle shows between the two schemes.

The head, which looks down, is elegantly oval, with hair undulating from a peak into the uṣṇīṣa, which is a little tilted forward and has a small and circular central hole in the top. The eyebrows are a distinct edge, curving gently with a large ūrṇā between, and the long narrow eyes have heavy and prominent lids. The nose is broken and the lips are thin, pursed and shaped above a jutting chin. The concave ears are long and close to the head.

The left knee is flexed, the abdomen is lightly rounded and the halo is plain. 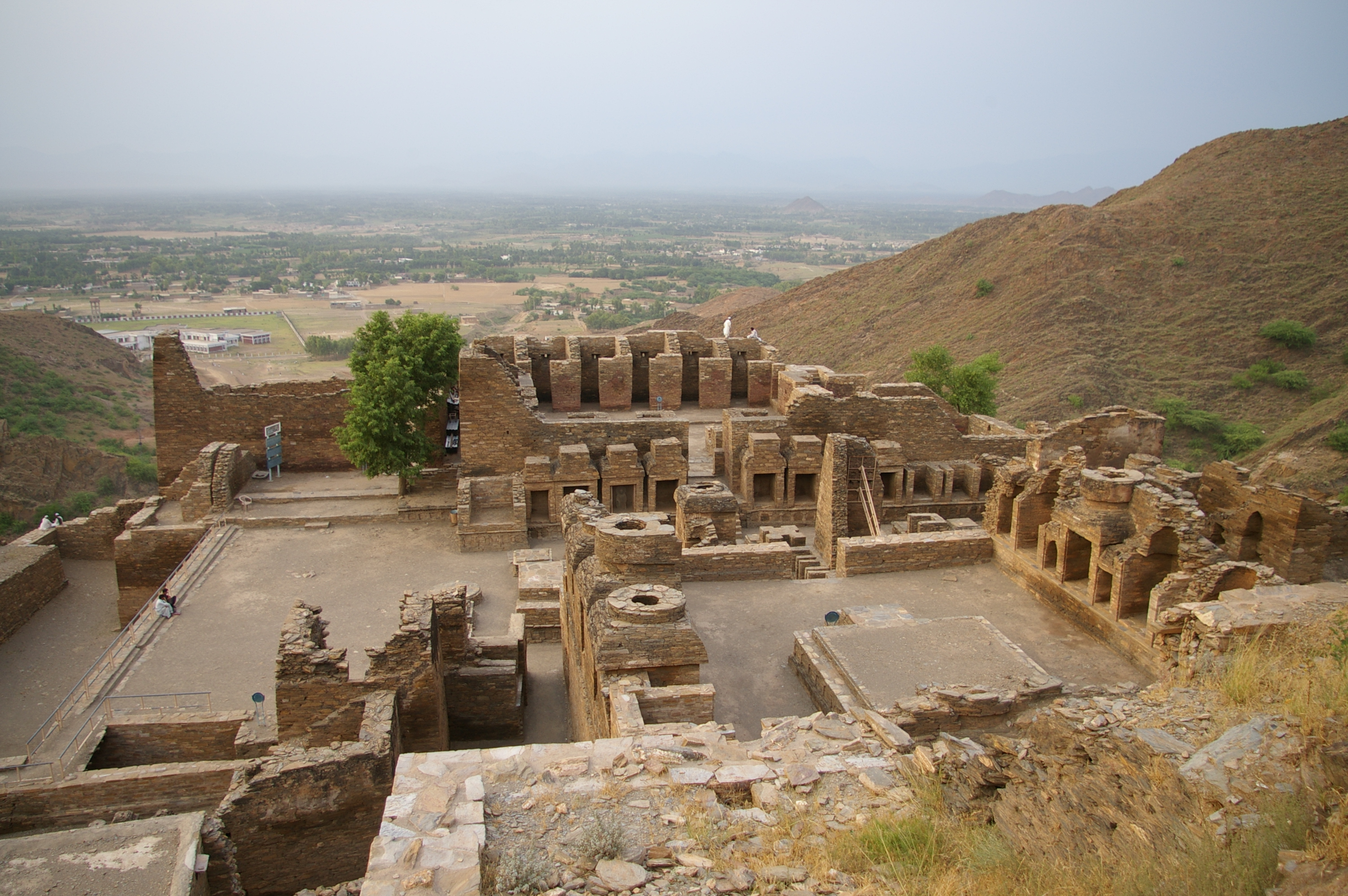 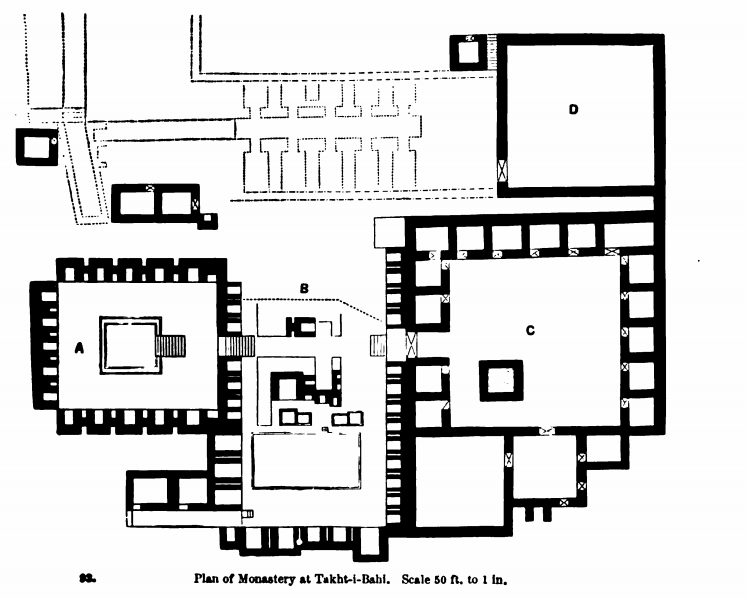 Plan of Monastery at Takht-i-Bahi
History of Indian and Eastern Architecture by James Fergusson, 1899 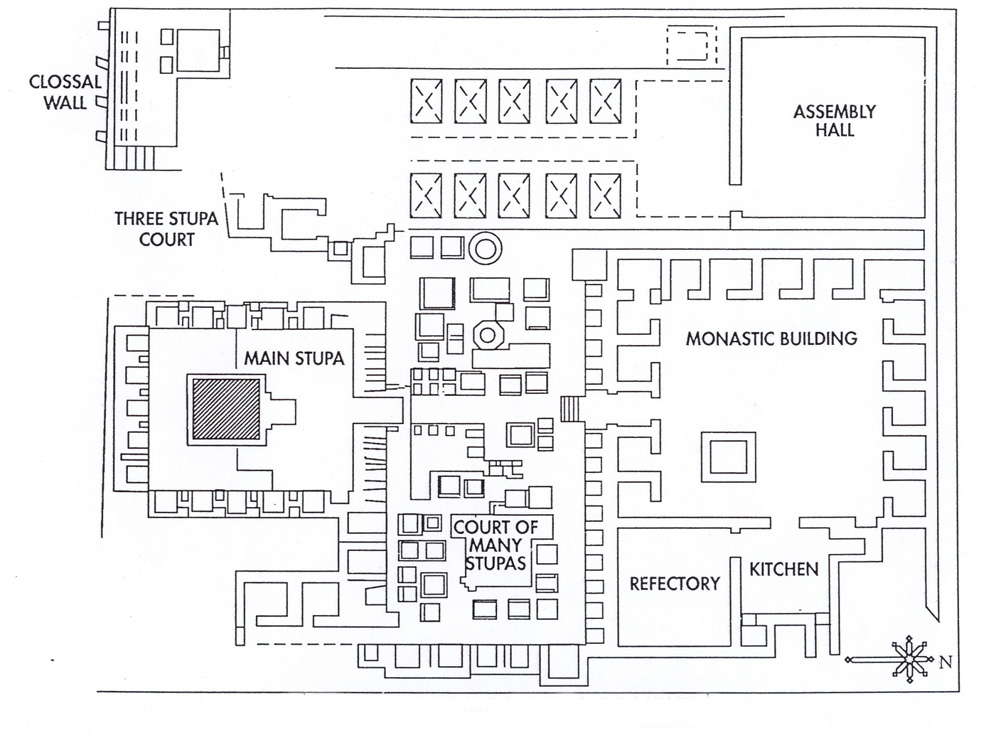 Section II: Summary of Periodic Report on the State of Conservation of the Buddhist Ruins of Takht-i-Bahi and Neighbouring City Remains at Sahr-i-Bahlol, Pakistan, 2003

Takht-i-Bahi (lat.34 degrees 17 minutes N x Long. 71 degrees 57 minutes E) is located about eight miles north-west of Mardan (District Peshawar, Pakistan)on the top of the spur of a hill with a broad view of the valley below. An inscription dates the site to the first half of the first century CE, but the earliest portion were likely a century earlier. Xuan Zang (7th century) describes the main stupa as the biggest and most spectacular he had ever seen. The large monastery built by King Kanishka west of the stupa was already in ruins by the time of Xuan Zang. An inscription on the site notes the visit of Viradeva, who likely came for study from Nagarahara (Jalalabad) at the time of the third Palava king.

A long flight of steps descends from the stupa area to the monastery. The cells surround a central court on three sides and the fourth side semms to have housed kitchens and storerooms. This source does not give the number of cells. Pg. 119-120 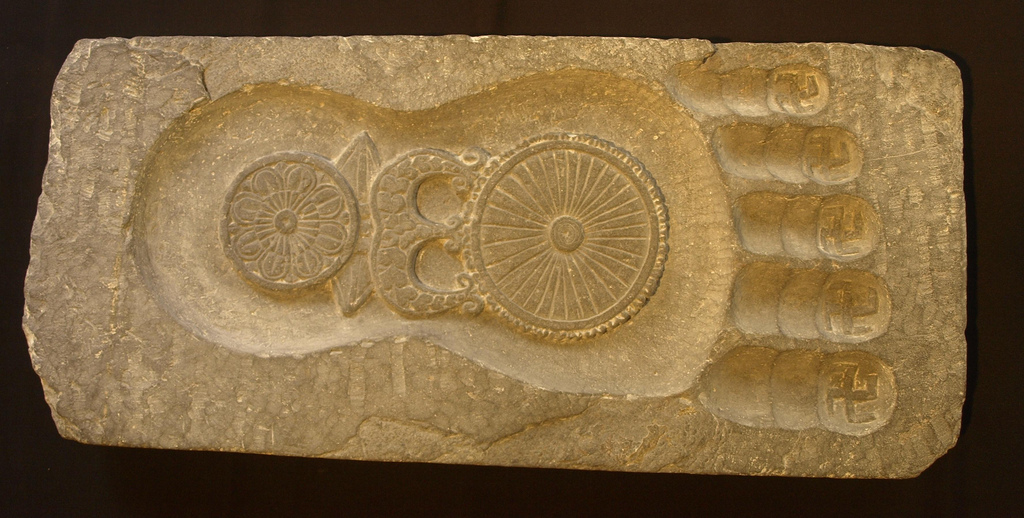